The earthquake was felt at Intensity 6 in Davao City 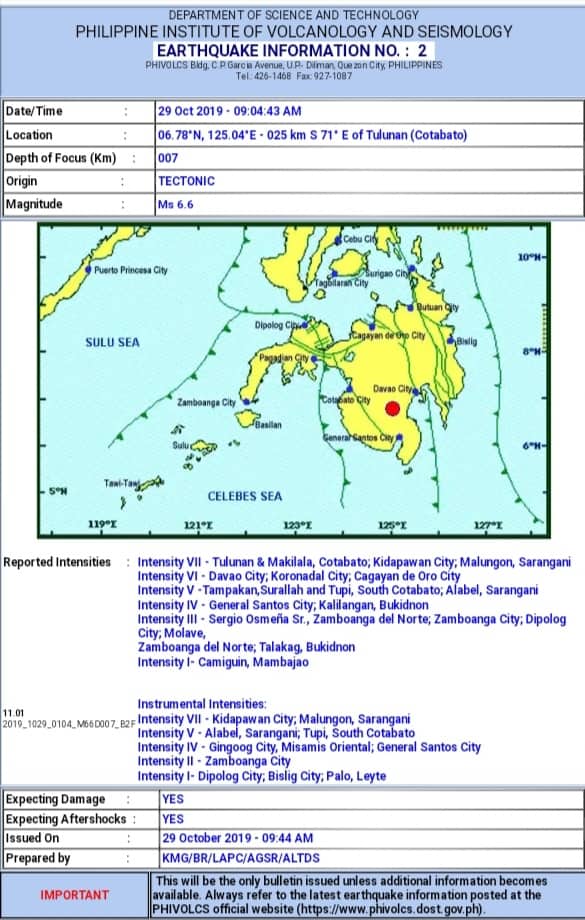 Classes in all public and private schools in Davao City — from kindergarten to post-graduate studies — were ordered suspended by Mayor Sara Duterte on Tuesday, October 29, 2019,  following the 6.4 magnitude quake that hit Cotabato province at 9:04 a.m. today.

The mayor, in a statement posted on her Facebook page, said classes have to be suspended as the quake might “have caused structural and electrical damage to buildings and houses.”

“All school owners, teachers, and other school personnel are hereby instructed to subject school structures to a safety inspection with a qualified engineer immediately,” the mayor said.

She added: “If they find building defects that are dangerous and need repair, they should immediately condemn the area and not allow students to use the same.”

The mayor said that suspension of classes tomorrow, Wednesday, October 23, have to be on a case to case basis and “shall depend on the individual schools’ announcement.”

The magnitude 6.4 earthquake was recorded at 9:04 a.m., with the epicenter located 26 kilometeres east of Tulunan town in Cotabato province, according to the Philippine Institute of Volcanogy and Seismology (Phivolcs).

It was felt at intensity 6 in Davao City, Koronadal City and Cagayan de Oro City.

It was recorded at Intensity 7 in Tulunan and Makilala towns of Cotabato; and in Kidapawan City and Malungon, Sarangani.

Intensity 5 was recorded in Tampakan, Surallah and Tapi towns in South Cotabato; and Alabel, Sarangani.

Intensity 4 was recorded in General Santos City and Kailangan, Bukidnon; at Intensity 3 in the towns of Sergio Osmeña Sr., Molave and Dipolog City, all in Zamboanga del Norte; Zamboanga City; and Talakag, Bukidnon; and at Intensity 1 in Mambajao, Camiguin province. /elb