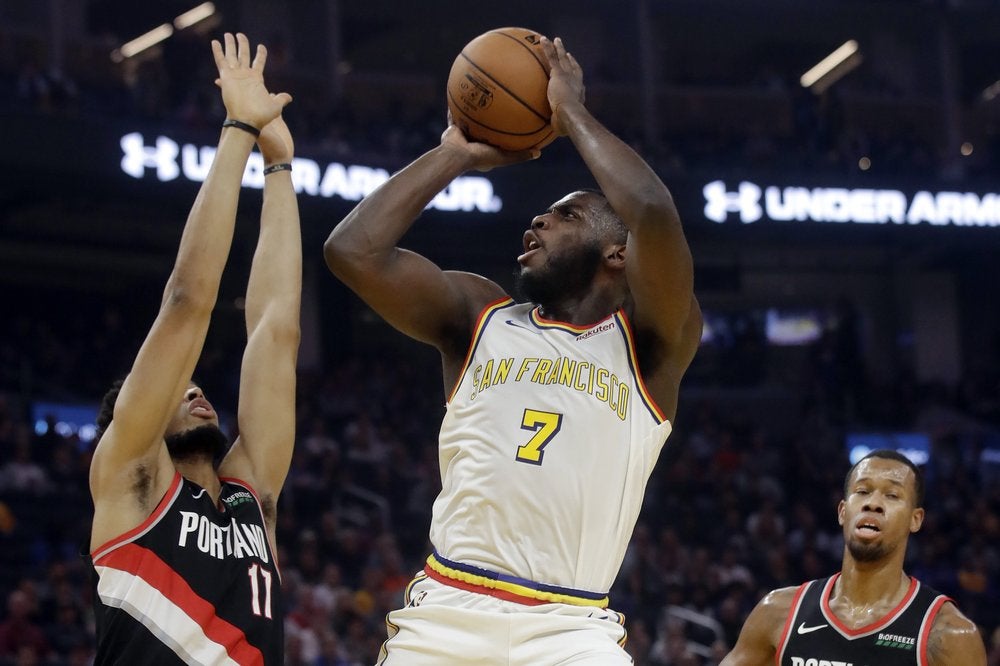 SAN FRANCISCO  — Those familiar chants of “M-V-P!” weren’t for Stephen Curry this time but rather a rookie named Eric Paschall who delivered a special performance on his 23rd birthday.

Not to mention the Warriors’ first win at new Chase Center — finally.

Everyone can exhale now.

Paschall hit a key 3-pointer with 4:05 remaining and finished with 34 points and 13 rebounds, leading injury-plagued Golden State to a 127-118 victory against Damian Lillard and the Portland Trail Blazers on Monday night.

“That was a little crazy. For a rookie you hear MVP, that’s a ‘wow’ moment,” Paschall said. “I thank Dub Nation for believing in me.”

Without all their injured stars, the young Warriors more than hung tough — they shined — against a Western Conference contender as Klay Thompson cheered from the sideline. Golden State (2-5) improved to 1-4 at home — the team hasn’t started 0-5 in its own building since losing its initial six home games in 1997-98.

“Just a fantastic effort by the whole group. Everybody that we put in came in and gave us big minutes,” coach Steve Kerr said. “It was just fun. It’s a fun group to coach because they’re young and hungry and they were fighting like crazy out there the whole game. That’s a good team they just beat. It was a great night for us.”

Lillard, no longer playing in his hometown of Oakland when he visits the Bay Area, notched his fourth 30-point performance in the first seven games with 39 points on 15-for-26 shooting, including five 3-pointers. Blazers center Hassan Whiteside added 22 points and 11 rebounds after missing one game with a bone bruise in his left knee.

Golden State, which swept Portland in the Western Conference finals last season on the way to a fifth straight NBA Finals, led 90-83 early in the fourth quarter before the Blazers fought back.

“They competed from the beginning, they played hard, they moved the ball really well,” Lillard said. “They played like a team that wanted to win. We got outplayed start to finish, I would say. We had some moments in the game, but we played like we just thought we were going to march in here and win the game, and they showed why they’re in the NBA. That’s a tough loss.”

Paschall’s late 3 put the Warriors ahead 107-99. Chants of “M-V-P!” greeted him when he shot free throws with 2:22 left. He also hit a pair of 3-pointers to start the game and made his initial 3 from deep. He scored 17 points in the opening period, and Paschall has scored 20 or more in all three games he has started. He had 25 in Golden State’s loss to Charlotte on Saturday, becoming the first Warriors rookie with back-to-back games of 25 points since Curry had five in a row in April 2010, according to the Elias Sports Bureau.

“He came in and didn’t look like a rookie at all, from the first day of practice,” Kerr said.

Fellow rookie Ky Bowman had 19 points and eight assists for the Warriors, who faced their worst start since beginning the 2000-01 season 1-7. But Golden State made five of its first eight shots to take an early 14-9 lead and kept bringing the energy and enthusiasm on both ends. Paschall and Bowman combined to shoot 20 for 33 — 11 of 19 by Paschall. He also made all eight of his free throws.

With 6:13 to go, Bowman drove to the basket and scored, then tangled with Whiteside, who pushed off with an elbow. Officials went to replay and issued Whiteside a technical.

CJ McCollum had 14 points and six assists for the Blazers, whose previous four games were decided by a total of nine points, including a 129-109 home loss to the 76ers on Saturday.

“They’re really tough to guard even for a veteran team. For a young group, we’re probably going to learn some lessons tonight,” Kerr said before the game.