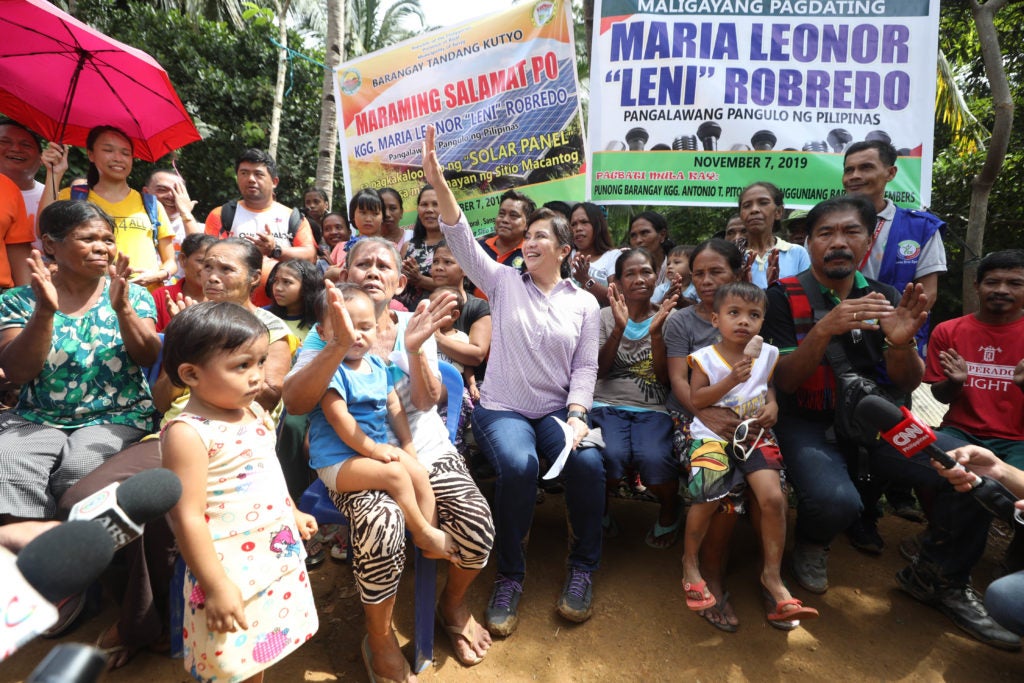 Vice President Leni Robredo is being surrounded by residents of Sitio Macantog, Barangay Tandang Kutyo in Tanay, Rizal, where she led the ceremonial turnover of solar kits from One Meralco Foundation Inc. The Office of the Vice President, in partnership with Meralco, installed 29 units of solar kits in each household at Sitio Macantog, in which 60 families have no access to potable water and electricity. (Photo by OVP)

Vice President Leni Robredo on Thursday said that as the new leader of the government’s campaign against narcotics, she would put an end to the killing of drug suspects but pursue the crackdown with “the same vigor.”

“I have no plans to have anybody killed since that is outside the bounds of the rule of law,” said Robredo, who on Wednesday accepted her appointment by President Duterte as cochair of the Inter-Agency Committee on Anti-Illegal Drugs, becoming the country’s new drug czar.

Her appointment came after she angered Mr. Duterte with her criticism of his brutal war on drugs, saying in an Oct. 23 interview with Reuters that too many people had been killed but the drug problem had remained prevalent.

A chance to stop killings

Six days later, in a fit of pique, Mr. Duterte dared Robredo to lead the campaign. On Oct. 31, before flying to Thailand for a summit of Southeast Asian leaders, the President signed Robredo’s appointment as drug czar.

Against the advice of her allies, who had said she was being set up to fail, and amid taunts from Mr. Duterte’s aides, who had expected her to kick away the gauntlet, Robredo announced her acceptance on Wednesday, saying she was aware of the politics behind the challenge but was willing to endure it all if it meant she was getting “a chance to stop the killings” and “bring to account those responsible.”

The war on drugs, Mr. Duterte’s signature policy, has cost the lives of more than 6,000 suspects, according to figures from the Philippine National Police, but human rights groups say the toll could be as high as 20,000.

The UN-backed International Criminal Court (ICC) has opened a preliminary investigation and the UN Human Rights Council has approved a resolution for an international probe of the killings.

Protesting what he calls interference in Philippine domestic affairs, Mr. Duterte has withdrawn the Philippines from the Rome Statute that underpins the ICC, and halted negotiations for loans from the countries that voted to approve the human rights resolution.

In accepting her appointment on Wednesday, Robredo made clear that she was “against the killing of the innocent” and “abuses committed by officials.”

On Thursday, she said the war on drugs would “continue with the same vigor and intensity,” but there would be no killings.

“My No. 1 concern is these killings. I believe that we can continue this campaign while maintaining it within the rule of law and the bounds of human rights,” she said.

“Let’s change the metrics—counting not … the … dead  but … [the] lives improved,” she added.

Robredo said that as soon as she accepted her appointment on Wednesday, she called a meeting of the interagency committee to determine the best course of action.

She is scheduled to meet with the heads of the committee’s members on Friday afternoon, and she would be given a briefing by her cochair of the panel, Philippine Drug Enforcement Agency chief Aaron Aquino.

Robredo said she planned to tap civil society groups and faith-based organizations for help in the fight against illegal drugs.

“There are a lot of private organizations that have really done a lot. I want the message to be clear that this fight is not just the [committee’s] fight, and not just the President’s fight, but rather it is the entire nation’s, so we need to help each other,” she said.

“I can only assure her of my prayers and moral support,” Caloocan Archbishop Pablo Virgilio David, a critic of the killings in the war on drugs, said on Thursday.

Fr. Edwin Gariguez, executive director of the National Secretariat for Social Action of the Catholic Bishops’ Conference of the Philippines, said Robredo’s approach to the drug problem was the same as the Church’s.

“I think the Vice President accepted the post because she has good intentions. Let’s give it a try,” Gariguez said.

The Makati Business Club said it hoped Mr. Duterte and Robredo would work together to strengthen the rule of law in the war on drugs and provide more rehabilitation, education and other programs to curb drug abuse, “which the business community is ready to support.”

Mr. Duterte has not spoken publicly about Robredo’s acceptance of his challenge, but his spokesperson, Salvador Panelo, said on Thursday that the President received her decision well during the Cabinet meeting on Wednesday night.

“It was good,” Panelo quoted Mr. Duterte as saying during the meeting, which Robredo did not attend.

“The President expects that the [Vice President will] see the realities on the ground, particularly with respect to the government’s position against extrajudicial or state-sponsored killings, and understand that deaths occur due to the violent reactions on the part of agents of the illegal drug trade against the strict enforcement of the law,” Panelo said in a statement.

He told reporters later that Executive Secretary Salvador Medialdea would set up a meeting between Mr. Duterte and Robredo for a discussion of the Vice President’s new job.

Sen. Panfilo Lacson, a former PNP chief, was also scheduling a meeting with Robredo, who had expressed willingness to listen to his suggestions on fighting illegal drugs.

“I am grateful and humbled by her gesture,” Lacson said, referring to Robredo’s text message to him accepting his offer of advice.

Read Next
Ginamos or hipon: Affordable appetizers for the Cebuanos