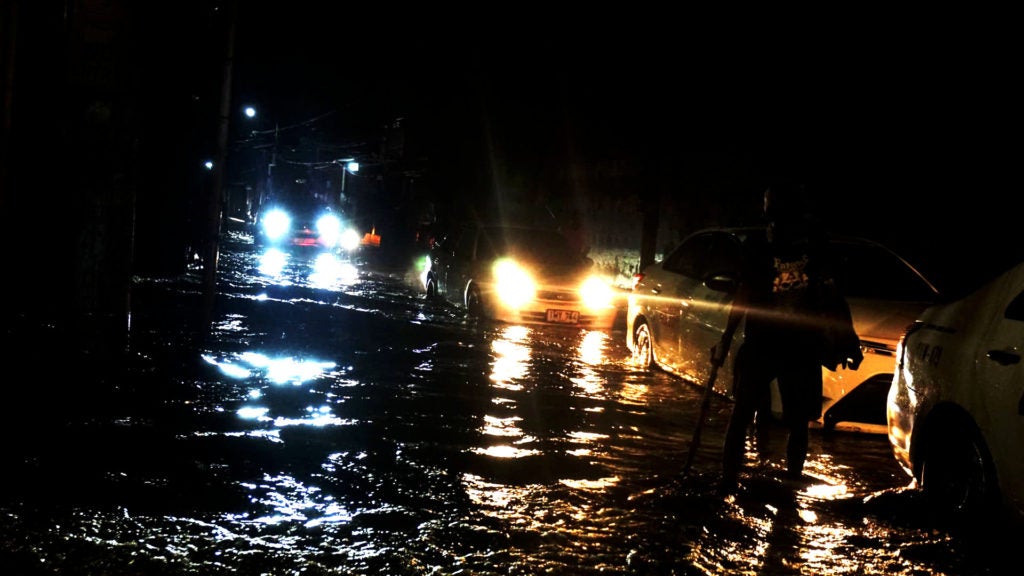 CEBU CITY, Philippines — The afternoon downpour has caused up to waist-deep flooding and traffic buildup in several road networks in the cities of Cebu and Mandaue on Tuesday, November 19.

Jacaban said some motorcycle drivers had to pull over their motorbikes at the roadside because of the water level.

Based on their monitoring, the traffic build-up and the flooding started around 4:50 p.m.

While the floodwater subsided in less than an hour, Jacaban said the heavy traffic congestion lasted until past 7 p.m.

(When the water rose in A.S. Fortuna, motorists were stranded as vehicles could no pass the flooded area of the road.)

Hector Arcenal of Cebu City Transportation Office (CCTO) said the Nasipit Road in Barangay Talamban was the first one to be reported for flooding and traffic build-up.

Traffic congestion and flooding were also experienced in the stretch of M.J. Cuenco Avenue, Bonifacio Street, Sikatuna Street, underneath the Mambaling flyover, Sabellano Street in Barangay Quiot, and the Kinsang-an portion of N. Bacalso Avenue, among others.

The traffic congestion in Cebu City, which spanned between 5:05 p.m. until 7:20 p.m., was worsened by at least four road accidents in the Banilad-Talamban road section, said Arcenal.

Meanwhile, the state weather bureau said the downpour was brought by localized thunderstorms and not by Typhoon Ramon or Tropical Depression Sarah.

“Ramon” is currently at the eastern side of Calayan, Cagayan with maximum sustained winds of 120 kilometers per hour  and gustiness of up to 165 kph.

Angelica Orongan, a meteorologist in the Mactan Station of the Philippine Atmospheric Geophysical and Astronomical Services Administration (Pagasa), said Ramon would no longer affect Central and Eastern Visayas area because of its distance.

Orongan said TD Sarah, which is now at 615 km east northeast of Borongan City, Eastern Samar, would also less likely bring rains in Cebu because of its upward track.

Sarah is expected to intensify into a tropical storm within the next 24 hours.

It has maximum sustained winds of 55 kph and gustiness of up to 70 kph while moving northwest at 35 kph./dbs