DON’T BAN, JUST REGULATE Users and dealers of e-cigarettes, like this shopkeeper in Antipolo City, are appealing to President Duterte to regulate rather than ban vaping devices, which they claim have helped millions of people to turn away from the more harmful tobacco cigarettes. —LYN RILLON

In just three days after President Rodrigo Duterte ordered a ban on electronic cigarette (e-cigarette) use in public, the police in Central Visayas had already confiscated at least 230 vaping gadgets.

De Leon said no arrests were made and the confiscations were just a way to inform the public that vaping was banned in public places.

“There is no punitive provision in the order so there will be no arrests,” he said.

De Leon also welcomed a plan by the Cebu City government to regulate vaping through an ordinance.

The police said 95 vaping devices were confiscated in Cebu City, 30 in Lapu-Lapu City, seven in Mandaue City and 74 in various other towns in Cebu province. Twenty were seized in Bohol and four in Negros Oriental.

Police Brig. Gen. Bernard Banac, the Philippine National Police spokesperson, said Camp Crame had not yet received reports of arrests and confiscations from the regions.

Targeting nicotine as the “addictive devil,” the President on Wednesday night said he had issued an order a day earlier to ban the use of e-cigarettes in public and to confiscate vaping devices.

E-cigarettes warm flavored liquid nicotine to produce vapor that is free of the estimated 7,000 chemicals in tobacco smoke, but contain a number of substances that could be potentially harmful.

Mr. Duterte also banned the importation of e-cigarette products and warned judges not to block his order. 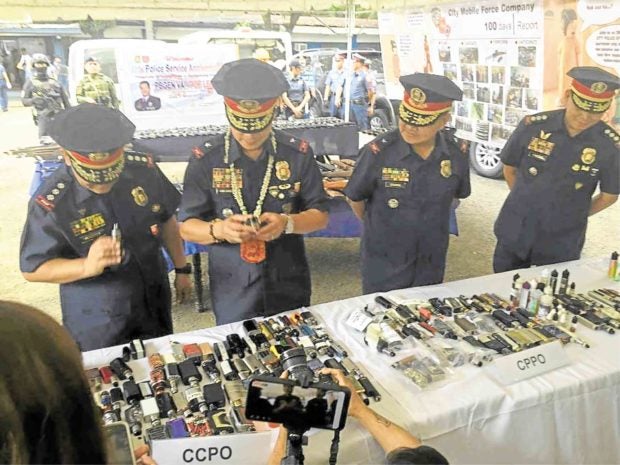 The PNP said it would implement the President’s directive in compliance with the two-year-old Executive Order No. 26, which provides a “smoke-free environment in public and enclosed places.”

Police Lt. Gen. Archie Gamboa, the acting PNP chief, said officers were directed not to detain violators. Those arrested would only be recorded in the police blotter and released.

Contradicting his earlier pronouncement that he would issue a directive against vaping, Mr. Duterte on Friday said he saw no more need for one since there was already a law to regulate nicotine, an addictive substance found in tobacco products and e-cigarettes.

Mr. Duterte did not specify the law he was referring to, but it could have been the Tobacco Regulation Act of 2003, which defined tobacco products as those “that consists of loose tobacco that contains nicotine and is intended for use in a cigarette, including any product containing tobacco and intended for smoking or oral or nasal use.”

The 16-year-old law, however, does not specifically cover e-cigarettes, which are fairly new in the Philippines and touted as a less harmful alternative to cigarettes.

Human rights lawyer Edre Olalia, president of the National Union of Peoples Lawyers, said the legal basis for the arrest of vapers was “highly debatable if not outrightly doubtful.”

“There is no applicable legal authority that I know of, unless the government and law enforcement agencies claim they are nuisance per se. But this is not a crime and warrantless arrest of a person—not confiscation of a prohibited item—can only be effected validly in relation to a criminal offense,” he said.

But Olalia added that the President’s order was “not surprising though because Duterte has [this] penchant to order arrest of people casually by his mere say-so.”

The arrests could be considered “arbitrary and whimsical through self-rule,” he said. “This is not to say that I am for vaping. On the contrary, I abhor it.”

Lacson: An issue for SC

Asked to comment on whether it was proper or illegal for police to confiscate vaping devices, Sen. Panfilo Lacson, a former PNP chief, said: “It is one issue that the Supreme Court has to resolve which the affected parties should immediately raise before it given that basic constitutional rights are being affected or threatened.”

Since the ban was announced, Filipino vapers have been asking why the government, if it was truly concerned about public health, wasn’t taking a similar move against tobacco, which has been proven harmful to both smokers and nonsmokers.

In a statement, groups representing around 200,000 e-cigarette users said “there is no plan to legally challenge the ban.”

They appealed to the President to regulate rather than ban e-cigarettes.

“The use of e-cigarettes has been helping millions of smokers quit all over the world, and imposing a ban would only worsen the smoking problem,” the Coalition of Asia Pacific Tobacco Harm Reduction Advocates said in a statement.

Health authorities should wait for results of investigations and not make “hasty decisions” in reaction to the outbreak of lung illnesses in the United States, referring to the more than 2,700 cases and 42 deaths linked to e-cigarette use there, the group said.

Other vaping groups that called for regulation were the Philippine E-cigarette Industry Association, Vapers Alliance and Nicotine Consumers Union of the Philippines.

The Department of Health took a major step to regulate e-cigarettes through Administrative Order No. 2019-0007, which it issued in July.

But a company called Green Puff and a certain Ryan Sazon, both e-cigarette distributors, challenged the order and obtained temporary restraining orders from the regional trial courts in Manila and Pasig.

The petitioners didn’t want the nicotine content as well as the flavors used in e-cigarettes to be regulated, according to Health Undersecretary Eric Domingo.

Under the AO, the maximum allowable nicotine content for e-cigarette “juice” was 20 milligrams per milliliter.

The order also gave the Food and Drug Administration the authority to “impose a ban on flavors and additives that are proven or suspected to be appealing to the youth, toxic, harmful, addictive or sensitizing.” Among the vape flavors currently available in the market are chocolate, cinnamon and strawberry.

Given that e-cigarette use is only starting to take root in the country, Domingo said it was imperative for government to step in now since its “long-term effects are still unknown.”

He said that in the case of regular cigarettes, it took about 40 years before it became certain that smoking could be deadly.

No. 1 preventable cause of death

“Cigarette smoking is the No. 1 preventable cause of death and disability in the Philippines,” Domingo said.

The P70 billion yearly revenue from cigarette taxes is only about a third of the P200 billion spent annually for treating illnesses linked to smoking. “So we’re really at the losing end,” he said.

Domingo acknowledged certain issues that made it “difficult” to ban tobacco use, including trade implications, the impact on the livelihood of tobacco farmers and concerns that prohibition would only lead to illegal distribution and smuggling.

There is also the tobacco industry’s effort to interfere in policymaking, he added.—WITH REPORTS FROM JULIE M. AURELIO, LEILA B. SALAVERRIA AND MELVIN GASCON

Read Next
WHO: PH youths 2nd most ‘inactive,’ next to S. Koreans