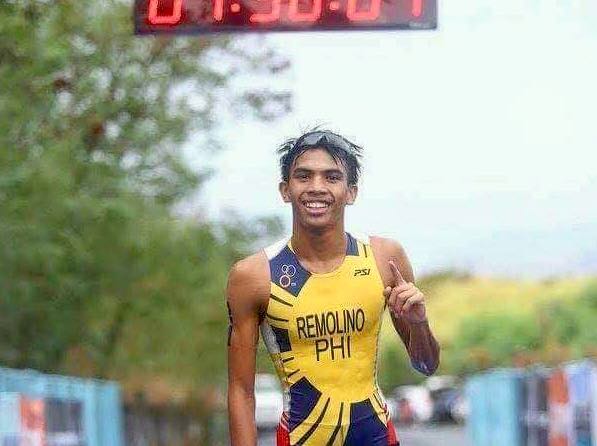 CEBU CITY, Philippines — Nothing less but the gold. This is the goal of 19-year-old Andrew Kim Remolino of Talisay City, Cebu.

Kim, as he is fondly called by everyone, will be representing the Philippines for the first time in the triathlon men’s event of the 30th Southeast Asian Games.

“A bit pressured and excited at the same time,” said Kim, who left for Clark City last Monday, November 26, 2019.

The young triathlete actually has a lot of burden on his shoulders. Not only is he stepping into the shoes of two-time SEA games gold medalist Niko Huelgas, but he or teammate John Leerams Chicano, are tipped to hand the Philippines the first gold medal in this biennial multi-sporting event which the Philippines is hosting from November 30 to December 11.

This is because the men’s triathlon competition will start at 6 a.m. on December 1 in Subic Bay. A day after the grand opening ceremonies which will be held at the Philippine Arena in Bocaue, Bulacan.

Huelgas and Chicano had given the Philippines a gold and silver finish in the 29th SEAG in Malaysia.

Kim, who is a member of the Talisay Luigi Triathlon Group (TLTG) Go for Gold,  admitted that this was an added pressure for him.

He clinched his SEA Games ticket by being the first or the fastest Filipino to finish in the two qualifying events for the biennial meet.

Back in April, Kim had to skip his senior high graduation at the Paref Springdale because it was scheduled on the same day of the first qualifying event for the SEAG, the Subic Bay International Triathlon 2019 in Subic.

Fortunately for Kim, skipping on one of life’s milestones was well worth it as he finished as the first Filipino in that race.

Representing the Philippines in the SEA Games has always been a goal for Kim.

“This is actually one of my goals, pero wala ko ga expect na as young as 19 kay makaqualify nako for SEAG,” said Kim.

(This is actually one of my goals, but I just did not expect that I would qualify for the SEAG at a young age of 19.)

Kim had even put on hold his college education to focus on training for his first SEAG stint.

(I was kind of excited but also worried because at first I didn’t know if I would be capable of a podium finish in the SEA Games but as of now, my mind is set and I have build up the confidence to grab the goal.)

Kim said that this SEA Games is very important because the Philippines is hosting it.

And, with the win streak of Huelgas, Kim said that he had to show the Filipinos that he could get the gold medal right here in the Philippines very own ground.

According to Kim, he has trained for what could be considered so far as the biggest competition of his life for four months straight under his father, coach Roland “Andoy” Remolino here in Cebu.

Despite all the pressure, Kim is confidently saying that he is ready to fight for the Philippines on December 1 when the starting gun fires off.

As to whom he will be dedicating his SEAG stint, Kim said, “Sa akong family especially sa akong kuya then sa TLTG family ug sa Go for Gold, then for the country and also to God.

(To my family, especially to my kuya, then to my TLTG family and Go for Gold, for the country and also to God.)

The kuya is his older brother whose name Luigi stands for the “L” in TLTG and who passed away a couple of years ago. Kim always dedicates his every race to him.

Kim won’t lack for moral support come race day as his whole family will be there, as well as all members of the TLTG and their parents./dbs