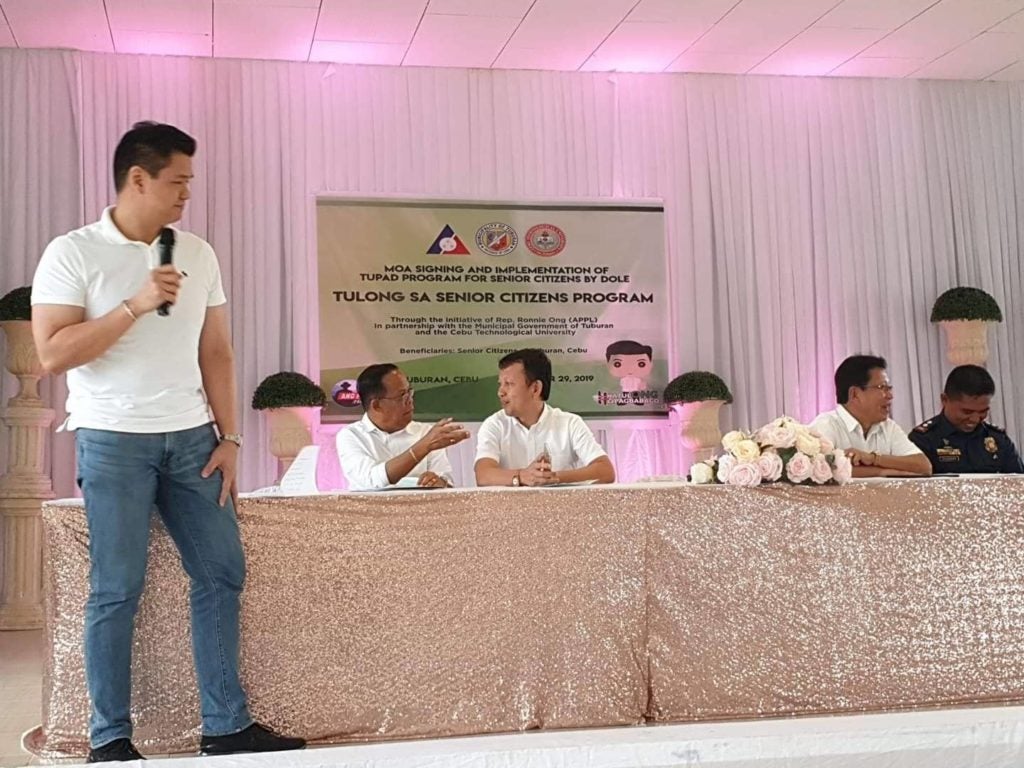 CEBU CITY, Philippines—The Department of Labor and Employment in Central Visayas (DOLE-) and the Ang Probinsyano Partylist launched on Thursday and Friday, November 28 and 29, 2019, the work-for-pay program for senior citizens in Danao City and in the municipalities of San Francisco and Tuburan.

This was revealed in an emailed press release from the office of the Ang Probinsyano Partylist Rep. Ronnie Ong.

The signing of the the agreements formalized their partnership in providing special employment for senior citizens.

“This is an opportunity to give them the value of hardwork and letting them realize that reaching the age of 60 is not the end of the world but a chance to live new lives,” said Dr. Perez in his speech.

On Friday. Rep. Ong and DOLE went to CTU- Tuburan to sign a similar agreement with the school.

Ong has forged a partnership with DOLE to initiate the work-for-pay program for senior citizens by tapping into the agency’s Tulong Panghanapbuhay para sa Disadvantaged/Displaced Workers (TUPAD) program.

“Many of our citizens continue to live in abject poverty because of the lack or total absence of economic opportunities for them. They have discounts on food, medicine, transportation and even entertainment but what’s the use of all these perks  if our senior citizens do not have the money to spend? This is the reason why we are now doing this program and we hope to replicate this all over the country,” Ong said.

The employment will prioritize the senior citizens who live around the various program venues. Their salaries will be sourced from DOLE’s TUPAD allocation.

The salaries of the senior citizen workers under this program shall be based on the minimum salary in each region.

To institutionalize the program, Ong has filed House Bill 5362 or the Senior Citizens Employment Opportunity Act to ensure the automatic employment allocation for Filipinos aged 60 years old and above.

Ong’s bill seeks to amend Section 5 of  Republic Act 9994 or the Expanded Senior Citizens Act of 2010 so that senior citizens, whose annual income is below the poverty threshold as determined by the Philippine Statistic Authority(PSA), would be given priority employment through job matches provided by the DOLE and the National Commission on Senior Citizens (NCSC).

HB 5362 compels all government offices to invite, select and hire qualified senior citizens for positions, qualifications and functions initially determined by DOLE, the NCSC and the Civil Service Commission.

The bill will also encourage the private sector to hire senior citizens. In return, they shall be entitled to an additional tax deduction from their gross income equivalent to 70 percent of the total amount paid as wages to senior citizens. However, this will be subject to the pertinent provisions of the Internal Revenue Code. /bmjo

Read Next
Rally behind your favorite Pinoy reps with the newest Inquirer Sports Viber Sticker set!