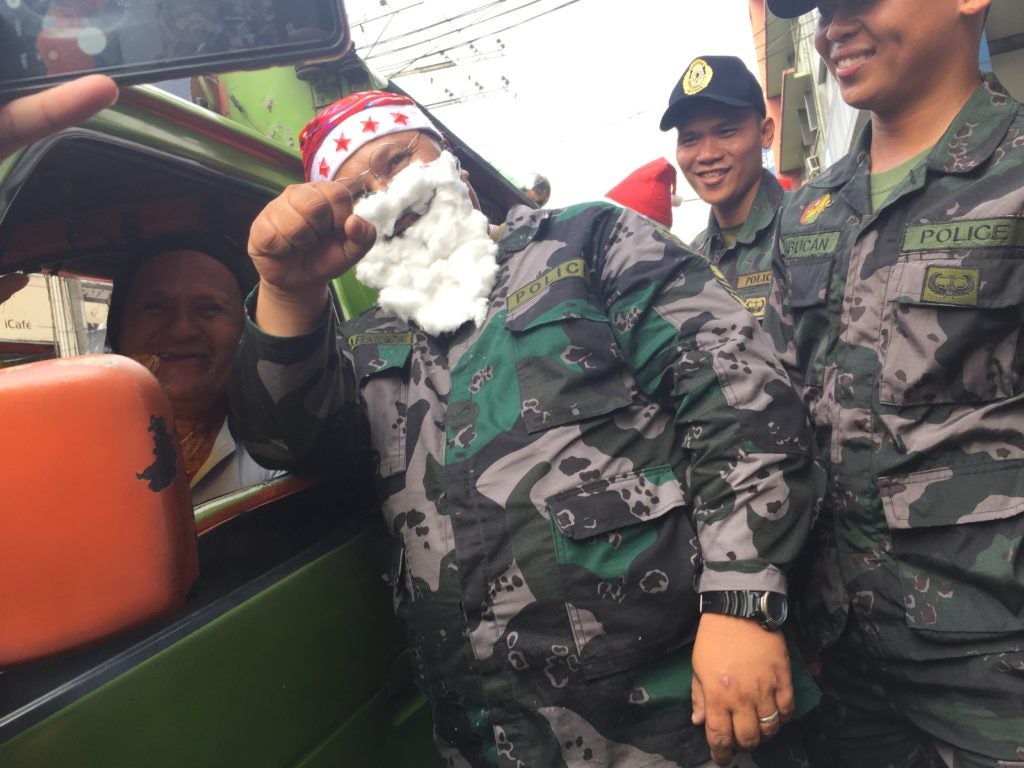 Cebu City Mobile Force Company’s (CMFC) “Santa” poses with one of the drivers that they asked to stop at a “checkpoint” in Sanciangko Street, Cebu City. | Rosalie Abatayo

CEBU CITY, Philippines — Having walked and pushed a wooden cart filled with coconut husks and buko juice for at least 3 kilometers, an exhausted couple got the shock of their lives when they were stopped by police officers some of them in full battle gear at a checkpoint in Cebu City.

Belen Jimenez, 63, said she was so confused on why they were stopped at the checkpoint along Sanciangko Street, and she racked her brain about what violation they could have committed.

Belen and her husband, Berting, 66, were on their way to Barangay Pasil in Cebu City where they would park their pushcart and head home to Naga City after another day of selling buko juice  along P. Cabantan Street on Thursday afternoon, December 12.

She said she and her husband were both exhausted and now puzzled about why they were stopped at the checkpoint manned by personnel of the Cebu City Mobile Force Company (CMFC).

But then when the couple finally stopped their pushcart  in front of the checkpoint sign, Belen’s puzzlement turned to relief and gratefulness because they were not issued violation tickets.

Instead, the CMFC personnel pulled out a guitar, their interns wearing Santa hats surrounded the pushcart and sang Christmas songs.

LIVE: Personnel from the Cebu City Police Office Mobile Force Company conduct "checkpoints" here in Sanciangko Street in Cebu City. But instead of arrests, they have more Christmasy objectives.l

One of the CMFC personnel, who was wearing a Santa beard on his face, came over and handed them a five-kilogram sack of rice.

(I was ready to reason out to them that despite us being senior citizens already, we are still here selling buko juice to earn a living.)

Despite that, the stunt made their hearts skip a beat, Belen said she was thankful for the unexpected Christmas present from the policemen.

Like the Jimenez couple, several other jeepney, taxi, private vehicles, and even motorcycles were randomly asked to stop for a checkpoint.

At first, a CMFC personnel would ask for the driver’s license and certificate of registration of the vehicle and even point out violations like not wearing seatbelts.

When the driver would start to get the documents and would hand it to the police, the other carolers would approach the drivers, strum the guitar and start singing.

Police Lieutenant Colonel Randy Korret, CMFC chief, said aside from the spirit of Christmas the caroling/checkpoint was made to motivate motorists to cooperate during regular checkpoints.

(That is one of the messages that we want to impart on the driving public about checkpoints with uniformed police personnel. They should not be scared. That will depend on the approach, but sometimes motorists are scared because they know that they have committed a violation.)

CMFC prepared 75 gift packs — some contained rice, noodles and canned goods — for the caroling which they conducted in Sanciangko Street in the downtown area and in Cebu Transcentral Highway in Barangay Busay./dbs

Read Next
After two hours of freedom, man shot dead by motorcycle-riding assailant in Negros Oriental