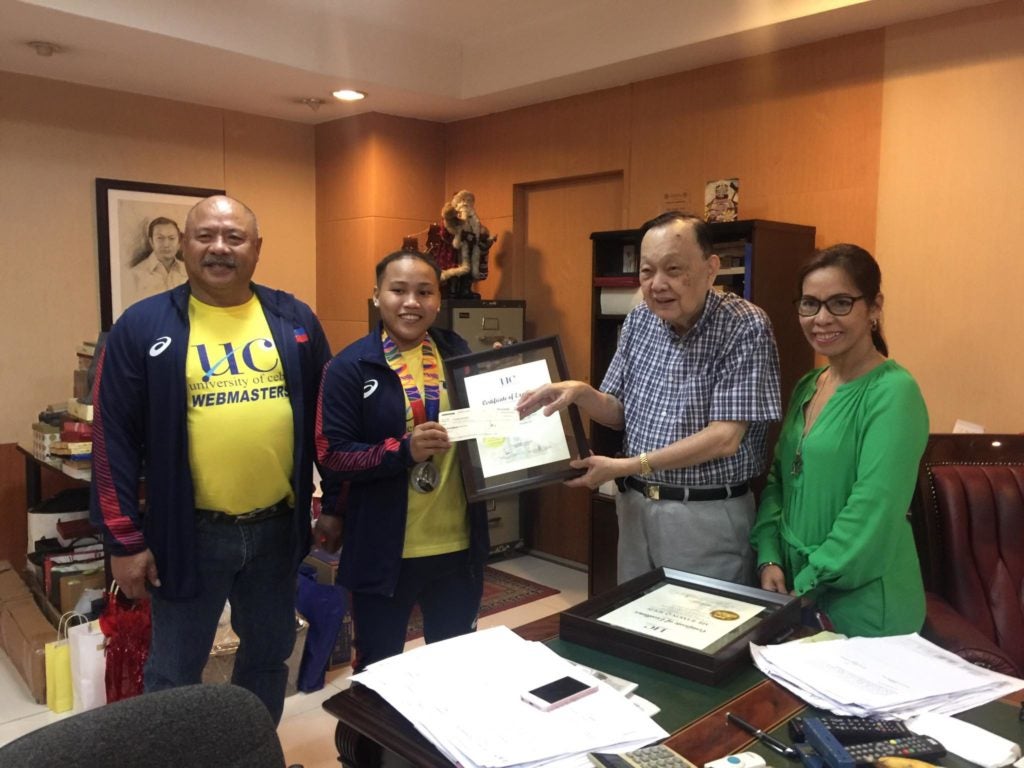 Weightlifter Elreen Ann Ando receives her certificate of excellence and her check for P100,000 from University of Cebu (UC) president, Lawyer Augusto Go, who recognized her efforts in the 30th Southeast Asian Games. With her are coach Ramon Solis (from left)  and UC athletic director Jessica Honoridez. | Mars G. Alison

CEBU CITY, Philippines — Recognizing the efforts and sacrifices of the student athletes and coaches, University of Cebu (UC) president, Augusto Go, handed out a total of P118,000 cash incentives to Webmasters who competed in the recently held 30th Southeast Asian (SEA) Games.

“Hopefully in the next game, she will make it to the top, in the Olympics. I think she has a very good chance. And, we will help her in training to get the gold medal,” added Go.

Go is referring to Ando’s efforts in clinching an Olympic spot. She just came from a competition in China where she padded her ranking to improve her Olympic chances.

Ando is also a product of the grassroots sports program of the Cebu City Sports Commission (CCSC). It was where she first got trained at the age of 13 years old.

“Thankful kaayo kay first time ni nahitabo,” said Ando of the welcome that the school had given her.

(I’m grateful because this is the first time that this happened to me.)

The UC president also recognized the efforts of cyclist Pamela Jane Ruiz, who was a last minute replacement in the downhill mountainbike event of cycling, by giving her a cash incentive of P8,000.

(I am also happy because even if I didn’t get any medal, I was still recognized.)

The 19-year-old just got accepted to the Philippine national cycling team last May and wasn’t really expecting to compete in her first SEA Games. Much more in an event which isn’t her forte as  she competes in the cross country event.

Ruiz is a second year Nursing student at the University of Cebu Lapu-Lapu and Mandaue (UCLM).

(I am very happy with her performance because I also saw her efforts. The good thing is that she gets the support, her campaign in the SEA Games was recognized. Hopefully she will also get the Olympics. We are very thankful to the administration especially for her academic support.)/dbs

Read Next
70 families in Inayawan lose homes before Christmas Day