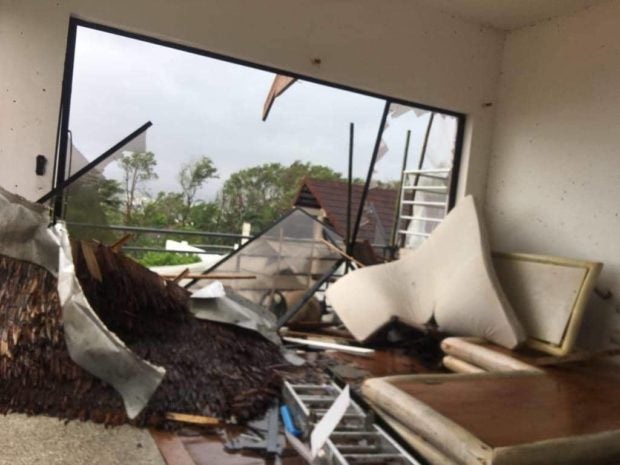 ILOILO CITY—Typhoon Ursula changed the landscape of the popular destination Boracay Island in Aklan province, damaging houses and resorts, blowing trees onto roads and cutting off electricity and communications.

The 1,032-hectare island was still without electricity as of Wednesday (Dec. 25) night and was cut off from mobile phone communication most of the day.

Most resorts and hotels have electric generator sets, however.

Maylynn “Nenette” Aguirre-Graf, municipal councilor of Malay town, Aklan, said strong winds from the southwest battered the island from 8 a.m. to 11 a.m. and again from the northeast around 2 p.m.

“A century-old tree that has withstood previous storms was uprooted two meters from our house,” she told the INQUIRER. Her information on the century-old tree could not be verified immediately.

She said debris littered the main road due to fallen trees.

“Coconut trees along the beach were cut in half with only the lower half remaining due to the strong winds,” she said.

Some residents posted on social media images of shattered glass windows, damaged facade of resorts and hotels, and flooded roads.

Graf said while Ursula was not as strong as Supertyphoon Yolanda in November 2013, its impact was similar to Typhoon Seniang in 2006 which left significant damage on the island.

Boat trips to and from Boracay had been suspended starting on Tuesday (Dec. 24), leaving tourists stranded on the island with those who had planned to spend Christmas there.

Mobile and internet services had been cut in the morning. Services of Smart Communications, however, returned in the afternoon. / TSB