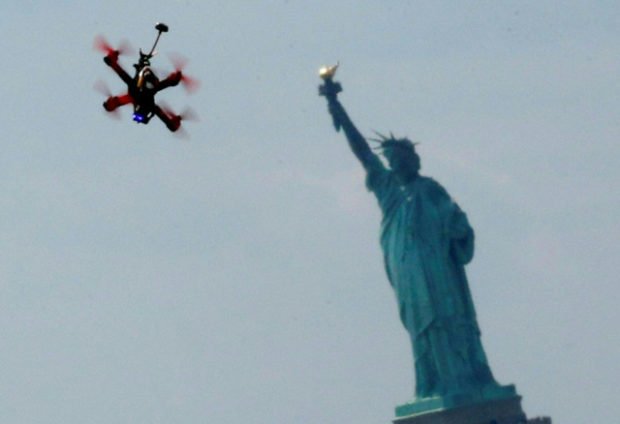 Quadcopter drones fly over the Statue of Liberty before the National Drone Racing Championship at Governors Island in New York on Aug. 5, 2016. |  AFP/Kena Betancur

United States regulators on Thursday unveiled a proposal to require privately operated drones to use remote identification (ID) — a kind of electronic license plate — as part of efforts to ensure airspace safety.

The Federal Aviation Administration (FAA) proposal for remote ID is now subject to a 60-day comment period before a final rule is adopted.

Officials said the new rule would help identify potential threats, and presumably enable security officials to act against them.

According to the text of the rule, the requirement would enable officials to remotely identify any drone in real-time and “assist federal security partners in threat discrimination — allowing them to identify an operator and make an informed decision regarding the need to take actions to mitigate a perceived security or safety risk.”

The text noted that the FAA wanted to be able to act against activities such as smuggling of illegal drugs or hazardous substances, unlawful invasion of privacy or illegal surveillance.

According to the agency, drones are a fast-growing segment of the transportation sector, with nearly 1.5 million drones and 160,000 remote pilots registered with the agency. The requirement covers all private drones weighing at least 250 grams.

The move comes amid efforts by both large tech firms such as Google parent Alphabet and Amazon as well as startups to use drones for the delivery of food, medical supplies and other items.

DJI, the Chinese firm which is a large manufacturer of drones, welcomed the action, saying it could enable drones to be used for complex operations, but added that it would review the details.

PH internet deal with Facebook a go by September 2020 — DICT