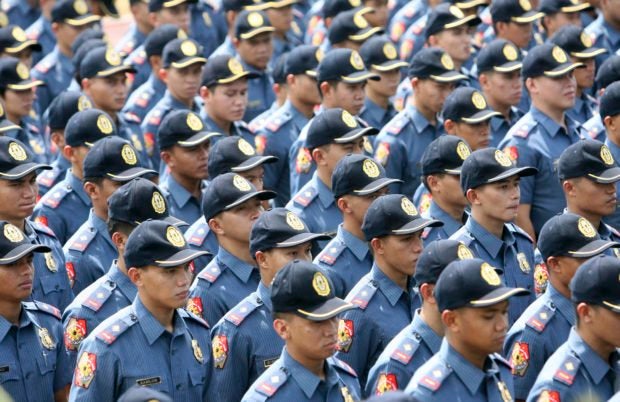 ‘THE CHALLENGE TO SERVE A NOBLE CAREER’ That’s how the Philippine National Police is making a pitch for the force as it hopes to beef up its ranks with more patrolmen this year. —MARIANNE BERMUDEZ

The Philippine National Police announced on Friday that it was looking for 17,000 new applicants for the service.

Acting PNP chief Lt. Gen. Archie Gamboa said the National Police Commission and the Department of Budget and Management have authorized the PNP to enlist 7,000 additional recruits this year, on top of its 10,000 yearly quota.

The PNP currently has an estimated personnel of 191,000.

New recruits will have an entry-level rank of police patrolman with a monthly salary of P29,668. This minimum gross salary for lowest-ranked officers, which is about double their previous pay, is in accordance with Joint Resolution No. 1 signed by President Duterte on Jan. 1, 2018.

In addition, new policemen will be entitled to receive P2,000 in monthly Personnel Economic Relief Allowance (Pera), P4,500 in monthly subsistence allowance, mid-year and year-end bonuses each equal to a month’s pay, and an annual cash gift of P5,000.

Other annual allowances are P5,000 as Productivity Enhancement Incentive (PEI), P2,400 in clothing allowance, P360 in laundry allowance, and a hazard pay of P6,480 per year.

The PNP is calling on all “able-bodied Filipino men and women,” ages 21 to 30, to take on “the challenge to serve a noble career in the police service,” Gamboa said in a statement.

“We want the largest pool of applicants that we can muster from which to select only the best and most qualified candidates [who] will be recruited into the police service,” he also said.

The new police recruits will in effect replace retired, deceased, dismissed, and other separated personnel, including those listed as absent without official leave.

“The annual recruitment program has taken Philippine law enforcement to a higher level by closing the gap in the police-to-population ratio to within ideal limits set by law,” Gamboa also pointed out.

Republic Act No. 6975, or the Department of the Interior and Local Government Act of 1990, sets a police-to-population ratio of one police officer for every 500 persons.

“We have adapted this digital information system in recruitment application to level the playing field for all applicants by eliminating opportunities for third party intervention in the rigid selection process,” he said.

Under the Oras system, all applicants become “nameless and faceless entries,” represented only by barcodes as they go through the mandatory procedures of tests, interviews, and examinations, Cubos said.

An applicant must be a Filipino citizen, must have obtained a college degree, and must pass any of the government service eligibility examinations, including the PNP entrance test.

Qualified applicants must also be of good moral character and must pass the PNP’s battery of examinations, including psychiatric, psychological, and physical examinations as well as a drug test, Cubos said.

Read Next
Palace condoles with family of journalist Niñez Cacho-Olivares