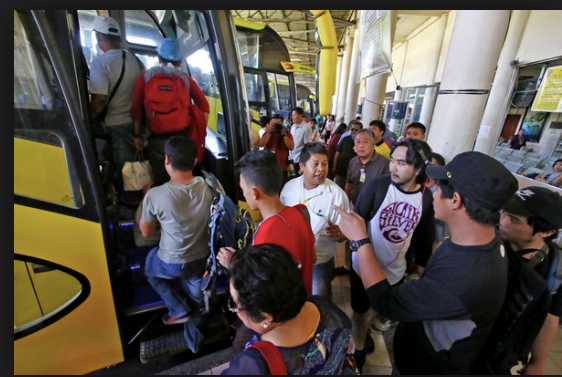 Passengers board buses at the Cebu South Bus Terminal in this file photo.

CEBU CITY, Philippines — Those who plan to spend the Fiesta Señor out of town should travel earlier.

She said all of the buses using the CSBT will be making their last trip on Saturday evening, January 18, 2020, as the Cebu City Transportation Office (CCTO) will close the Natalio Bacalso Avenue for the entire duration of the Fiesta Señor to give way for the contingents of Sinulog Grand Mardi Gras.

“All the buses must already be out of the terminal by midnight because there will no longer be trips in the morning. They will only come back here if the CCTO will already open N. Bacalso after the Sinulog,” Quijano told CDN Digital on Thursday, January 9.

During the Sinulog, the CSBT will serve as the main staging point of the Emergency Preparedness and Response unit of the Provincial Disaster Risk Reduction and Management Office.

PDRRMO chief Neil Angelo Sanchez earlier said the province will be deploying its emergency and rescue vehicles during the Grand Mardi Gras.

Emergency response teams from at least five LGUs will also be deployed in the emergency station along the Sinulog parade route.

Quijano said they are still waiting for the CCTO to designate a temporary terminal for the south and midwest-bound buses that will be displaced during the whole-day closure of N. Bacalso Avenue.

Even as the buses will not be staying at the CSBT for the entire day, Quijano said the ticket controllers of the bus lines should be at the bus terminal by Sunday afternoon so that they will be able to issue tickets immediately once the CCTO declares N. Bacalso open after the Sinulog showdown.

Cebu City Mayor Edgardo Labella earlier said they intend for the Sinulog to cap off at 7 p.m.

As the terminal operation would be at a halt for the entire day on Sinulog, Quijano said they are expecting that the volume of passengers will surge once the Sinulog is already over and the streets are opened. /bmjo