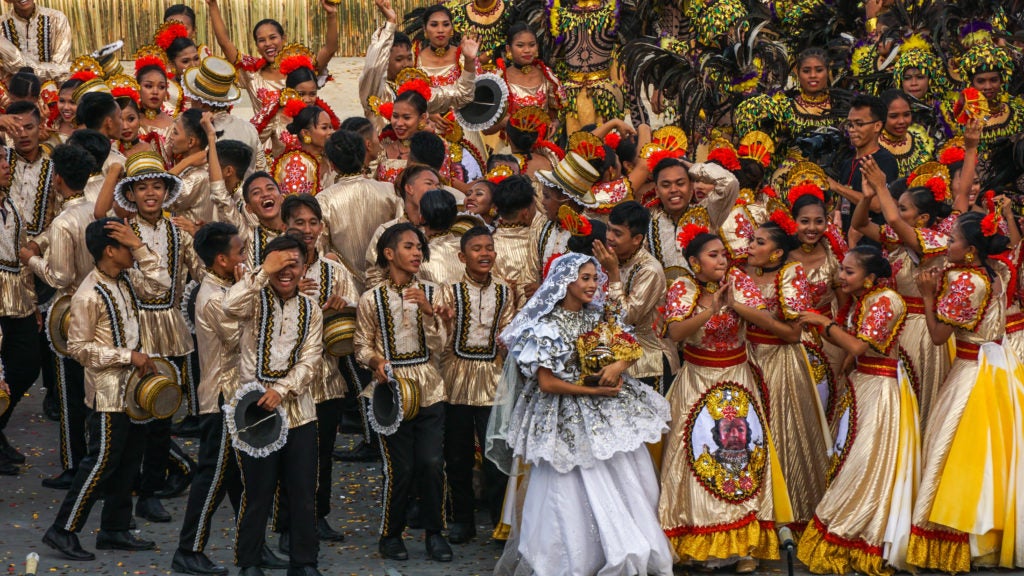 CEBU CITY, Philippines – They wanted to convey a message not only relatable for young adults but also for members of the old generation. And what better theme to perform than the spine-chilling tales from Philippine folklore.

The team behind the success of Carcar City Division, the champion for the Sinulog sa Lalawigan 2020, said they decided to show and tell to the public as well as to the judges of the competition  that faith is bigger than the fears people have.

“Our faith to the Señor Sto. Niño is the biggest and strongest thing we have. If we keep that kind of faith, we can face and deal with even the worst kind of elements surrounding us,” said Rolando Monto, head choreographer of the contingent.

The Carcar City Division, who also happen to bag the 1st place for the Sinulog-based Category for the Sinulog Grand Parade 2019, showcased a narrative on how people in an unnamed community were saved from the attack of the ferocious mythical creatures such as the manananggal with the help of the Holy Child.

What seemed a simple and straightforward storytelling, Monto, however, said the concept — together on how it will be interpreted through dance — was the most crucial part during their preparations which took more than three months.

“The concept was a brainchild of our creative director, Ms. Kathy Estenzo. We placed huge efforts on making sure the concept, the narration will not get lost in the dance … we really wanted a concept that both members of the young and old generation can relate to,” Monto added in a mix of Cebuano and English.

They also received awards for Best in Costume, Best in Musicality, and ranked 2nd in the Best in Street Dancing.

Monto, on the other hand, said they did not expect to win, citing they were dealing with ‘dozens of issues and troubles’ throughout the duration of their preparations and conceptualization that led them to allocate around P6 million to P7 million as budget.

“We never expected to be champion. We just made sure and told our dances to go out there, and give their very best shot in the performance,” said Monto.

“Of course there were issues and challenges especially in terms of weather since we have to practice outdoors but the unfavorable weather conditions last year kept our plans at bay. And the children, they also had a hard time during the rehearsals. In turn, we decided to set aside around P6 million to P7 million as budget for the whole festival, including for the Sinulog Grand Parade,” he added.

The contingent’s head choreographer, however, said their recent success gave them the slightest hope to compete for the Sinulog Grand Parade, the culmination of the Sinulog Festival 2020, which is slated this January 19, 2020.

“We will be preparing to showcase another and different performance for the Sinulog Grand Parade,” Monto added./dbs

Read Next
IN VIDEO: Streets of Cebu City erupt in colors and lively dances as Sinulog 2020 begins