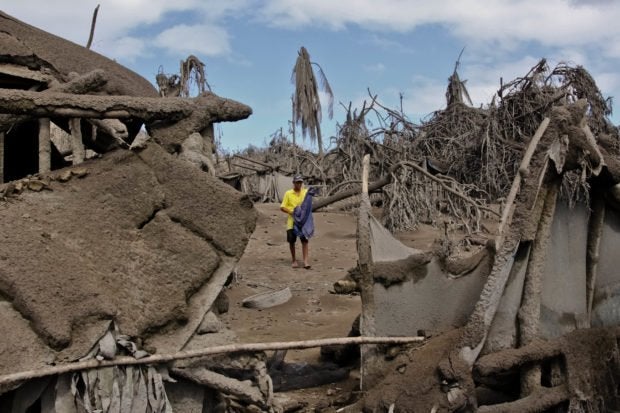 NOTHING LEFT Berto Murta, 65, returns to Taal Volcano Island on Tuesday and is saddened by the sight of destruction wrought by Taal’s eruption on his community. —CHRIS QUINTANA / CONTRIBUTOR

TALISAY, Batangas, Philippines — Once Taal Volcano has calmed down, residents of Volcano Island say they will accept the “painful” reality of leaving their communities for good.

According to islanders interviewed by the Inquirer, they are willing to cooperate with whatever the government sees fit for them.

“That will be very painful for us, especially for my husband who has spent his entire life living there,” said Princess Mendoza, 29, resident of Barangay San Isidro on the island.

“But what can we do? We have to abide by the dictates of the government,” she added, teary-eyed.

President Rodrigo Duterte on Tuesday had reportedly approved a recommendation to declare the island a “no man’s land,” as government relief efforts were hampered by the sudden steam-driven eruption of Taal.

At a briefing, Defense Secretary Delfin Lorenzana said the President backed proposals to bar people from living on the island.“If people are allowed to return there and if there will be another explosion or violent [eruption], I think all people will perish on the island,” Lorenzana said.The Philippine Institute of Volcanology and Seismology has prohibited permanent settlement on the island, declaring the area as a “permanent danger zone.”

However, about 4,000 residents have settled on the island despite the warnings and managed to earn a living from tourism, fishing and farming.

Princess and her husband, Raymund, said they were not objecting to the proposal. After all, they doubt if they still have something left to return to on the island after Taal’s eruption.

They were earning a living on the island as tour guides and by growing livestock.

“Our biggest loss are our animals. They have helped us go through life by augmenting the little income we derive from attending to foreign tourists,” Princess said.

She said she and her three kids were in her parents’ house in Laurel town when Taal Volcano began to spew ash and steam on Sunday.

That made evacuation for Princess and her children “easier,” instead of having to bring them out of the island on boats, jostling against other islanders who were wanting to flee.

Raymund managed to flee on Sunday afternoon, but returned on Tuesday to check on their farm animals.

“He was still hoping [some animals were] alive,” she said.

The volcano began spewing a dark column of ash, followed by continuous rumbles on the ground around 2 p.m. on Sunday, according to fisherman Danilo Cueto, 35.

He, too, is open to the government’s plan to shutter the island to settlers, despite the risk of losing additional income from boat rentals from Talisay port here to the island.

“This start of the year would have been a good time to earn extra, if not for the eruption of Taal. If that is the decision, we will have to adjust,” Cueto said.

In Sto. Tomas City, the fine ash drifting into a school gym on gusts of wind is a constant reminder for evacuees of the volcano that threatens to bury their homes forever.

As they sit in the spaces fenced in by the few bags and boxes of belongings they could carry, evacuees wonder how long they will have to wait to know whether Taal Volcano will devastate the province or sputter back to sleep.

‘All in God’s hands’

“It’s all in God’s hands now. We are not sure if we will have a home to return to,” said Leonita Gonzales, 52, who fled with the rest of her household from the danger zone around Taal.

Her banana palms were destroyed by the ash that fell after the volcano started to gush smoke on Sunday. She is uncertain whether her home’s tin roof will be able to bear the weight either.

Nearly 44,000 people have fled the 14-kilometer danger zone around Taal, where volcanologists have warned a devastating eruption could rain rocks and magma and set off a tsunami from the lake in which the volcano sits.

—With a report from the wires