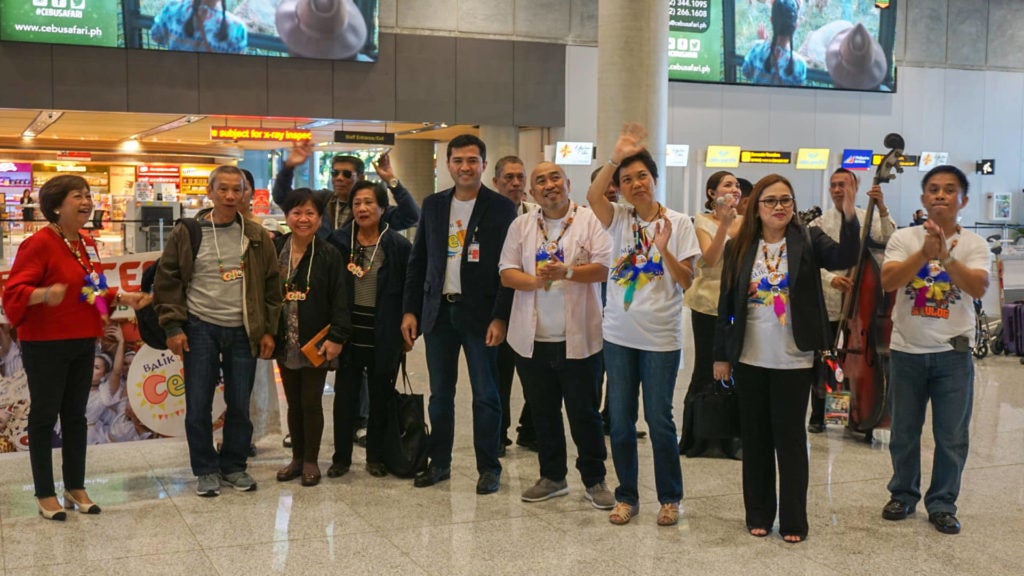 LAPU-LAPU CITY, Cebu — “Are we going to Bukilat Cave?” an enthusiastic Estelita Fernandez asked her companions while staring at the electronic billboard at the Mactan Cebu International Airport (MCIA).

The 65-year-old retired employee of a Sillicon Valley company was referring to the famous tourist attraction in Camotes Island, which is 1.5 hours from Mactan Island via a fast craft.

It is Fernandez’ first time in Cebu and she is excited to experience the warm Cebuano welcome that she has been hearing about from friends who serve at the Our Lady of Peace Church in Santa Clara, California, USA.

Fernandez, along with 14 other balikbayans, who trace their roots from different provinces in Luzon, arrived in Cebu on board Philippine Airlines (PAL) flight PR 1845 at around 8:15 a.m. on Thursday, January 16, 2020.

They were on a 16-hour flight from San Francisco and had a connecting flight to Cebu via Manila.

“Excited ako to participate in the tour. We are going to be touring around the Philippines for 15 days. First stop is in Cebu, so we can go to the pilgrim center, the Basilica,” says the native of Pangasinan, who migrated to the U.S.in 1981 when she got married.

Along with her peers, Fernandez is going to travel around Cebu before heading to Bohol, Camiguin, Cagayan De Oro and Davao until January 31, 2020.

She will then travel to different provinces in Luzon and to the nation’s capital in Manila before heading back to the U.S. on February 13, 2020.

In the same flight with Fernandez is Roger Dayoan, a 79-year-old retired civil engineer from Vallejo, California.

Dayoan lost his three luggage pieces during the flight and airline personnel are still working on locating them as of 10:15 a.m.

But instead of being angry about the situation, Dayoan choose to laugh about it and focus instead on the vacation.

“Ano pa bang magagawa ko? (What else can I do?),” he says while exchanging good-natured banter with friends on where they will go while waiting for his luggage to arrive.

Dayoan says he was only 12 years old when the family migrated to the U.S.

He is now an active member of Saint Catherine of Siena Catholic Church in Vallejo, California.

Dayoan said he will take advantage of Cebu’s bounty of the sea and will eat seafoods during his stay.

Joe Matlan of Sacramento, California was smiling from the moment he saw and heard  the rondalla singing the iconic Sinulog tune as he went down the escalator at the international airport.

It is Matlan’s first time to the Philippines and the Cebuanos did not disappoint.

He said to be welcomed by Cebuanos at the airport is a pleasant surprise.

“It’s pretty surprising.There’s a lot of enthusiasm in them and they are really appreciative of the foreigners who come to visit,” he tells CDN Digital.

Matlan is looking forward to celebrate the festival on the streets. He said he was invited by a friend who was born in Cebu but is now living in the US.

Matlan said he will make sure to enjoy his stay in Cebu with its beaches, food and karaoke on top of his list.

The warm Cebuano welcome at the airport is a private sector-led event that started in 2002 with the formation of the Balik Cebu program.

The Balik Cebu committee arranges for the rondalla welcome of the balikbayans, returning residents, guests and tourists.

They were given leis and Sinulog kits, which contain bottled water, tissue, whistle and a Sinulog guide.

This is the 19th year that the airport welcome is organized with the Mactan Cebu International Airport Authority, GMR Megawide Cebu Airport Corporation, Department of Tourism and the Cebu City Government through the Cebu City Tourism Commission. /bmjo