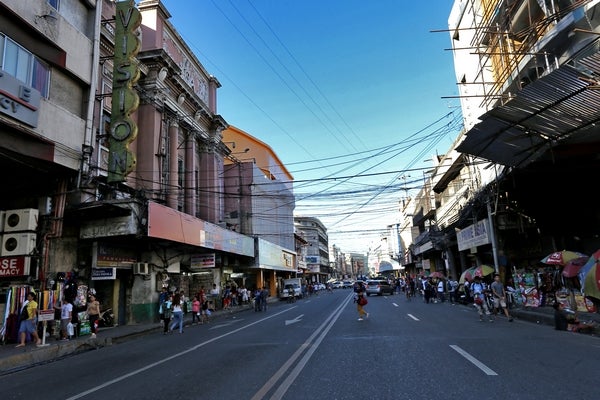 Walking in some streets of Cebu City’s downtown areas such as Colon Street shown here may be a solution to the worsening traffic. | CDN file

CEBU CITY, Philippines — Walking in some streets of Cebu City’s downtown areas as a solution to the worsening traffic may soon be implemented.

This after  National Economic Development Authority Central Visayas (Neda-7) Director Efren Carreon confirmed to CDN Digital that their feasibility study for the pedestrianization of the streets in the downtown area has already been completed.

“The study is already complete and we are just waiting for a schedule to present our recommendations to the city government [of Cebu],” Carreon told CDN Digital.

Pedestrianization would mean closing the streets to vehicles and encouraging people who go about these areas to walk.

The NEDA-7, in 2018,  commissioned a P3.5 million study on the Economic Impact of Pedestrianization of an Urban Space in Metro Cebu which covereda 0.30 square kilometer portion at the heart of the city and involved 15 street sections and a total road length of 4.59 kilometers.

Carreon, however, clarified that if the city government agrees, it may not be the entire stretch of their study that will be pedestrianized.

“Maybe dili siya the entire kay ma-disrupt man pod ang mobility sa mga tawo (not the entire area under the study because it may disrupt the mobility of the people there) . But there are sections [that pedestrianization is feasible],” Carreon said.

Carreon did not specify which sections in the area that was included in the study has been found to be feasible for pedestrianization.

Stakeholders such as pedestrians, entrepreneurs and employees of business within the study area were interviewed as part of the study in determining the possible changes in sale and revenue of businesses, assuming that the area will be pedestrianized, compared to the absence of pedestrianization.

Aside from the inputs of stakeholders, the study also took into account the findings of other related studies sanctioned by other government agencies such as the Cebu City government and Department of Public Works and Highways.

When the news of pedestrianizing the downtown area first came out in Cebu Daily News in 2018, Carreon also said that although infrastructure is necessary to decongest existing roads, the public must realize that limitation in space needs to be considered.

The economic manager said the public must also be open to change their behavior and perspective in mobility.

The Neda-commissioned study, however, is not the first to take pedestrianization as a possible solution to traffic congestion woes.

In 2011, a group of 75 architecture students from the University of San Carlos (USC) presented a masterplan to open “heritage streets” for pedestrians.

The masterplan covered Colon Street and other heritage sites in the area including near Barangay Parian. /bmjo