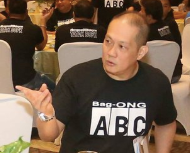 CEBU CITY, Philippines– Road clearing within the small barangay roads can be challenging for the barangay chiefs.

This was the statement of ex-officio Councilor Franklyn Ong, the president of the Cebu City Association of Barangay Councils (ABC) and chief of Barangay Kasambangan after the Department of Interior and Local Government (DILG) released the guidelines of the 75-day road clearing for local government units (LGUs).

Ong said that biggest challenge for the barangays would be the identified city-streets located in residential areas where many of the houses have already encroached the street.

The problem will arise if property owners would refuse follow the DILG mandate, although Ong said the barangays would have to exhaust all means to make people understand.

“This is really a challenge to our barangays. Lisod gyod labi na sa atong mga bag-ong kapitan atubangun nila ang mga residente nga dugay na dinha. (It is especially difficult for new chiefs who have to face residents living there for a long time.) We really have to talk to them,” said Ong.

Ong said the DILG Central Visayas (DILG-7) already briefed recently the barangay chiefs of their roles in the new directive for the road clearing.

Most barangays have coordinated with the city planning in identifying these streets within the barangay boundaries and the public and private streets.

For Ong’s own Barangay Kasambagan, he already submitted the requested documents to DILG for review.

“The 75-day deadline is a challenge, but that is something we have to do,” said Ong.

In the DILG memorandum, the local government units down to the barangays would now be responsible for the road clearing operations.

Within 75 days, the LGUs will need to implement the road clearing by removing all kinds of obstruction in the roads including house encroachments.

Local chief executives who fail to follow the directive will be issued a show-cause order for non-compliance. /rcg