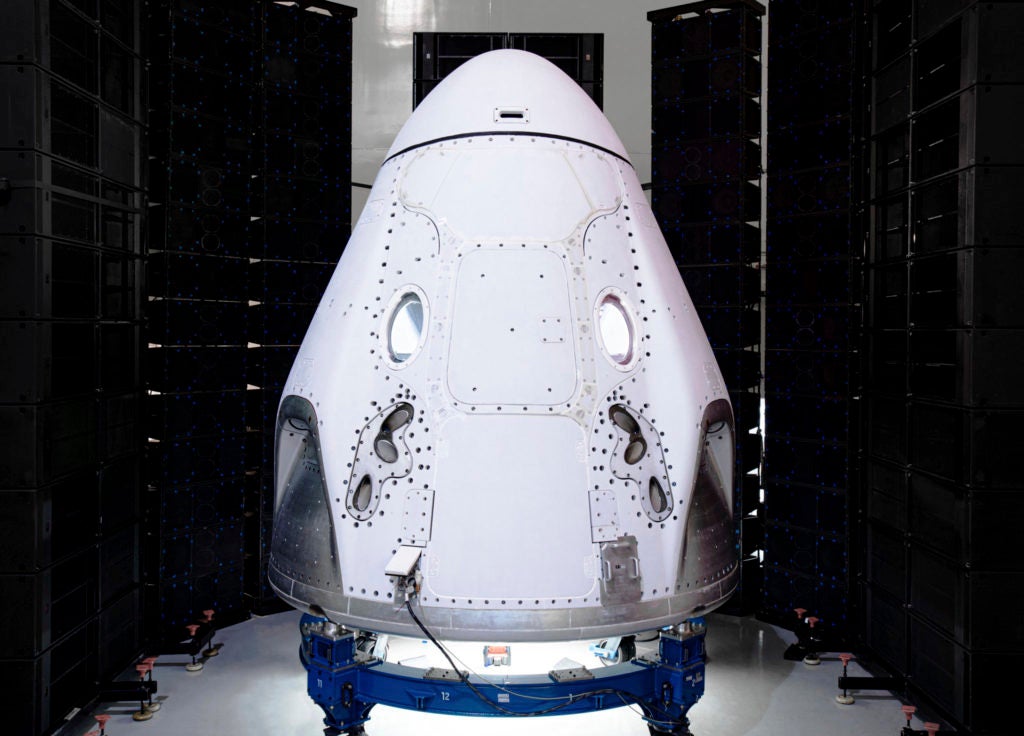 This undated photo made available by SpaceX in February 2020 shows the Crew Dragon spacecraft undergoing acoustic testing in Florida. On Tuesday, Feb. 18, 2020, SpaceX announced it is working with Space Adventures Inc. to take tourists into a high orbit. Ticket prices aren’t being divulged but are likely to be in the millions of dollars. (SpaceX via AP)

CAPE CANAVERAL, Fla. (AP) — SpaceX aims to launch up to four tourists into a super high orbit, possibly by the end of next year.

The private company is working with Space Adventures Inc. for the flight, officials announced Tuesday. Ticket prices are not being divulged but expected to be in the millions.

Space Adventures already has helped put tourists into orbit with trips to the International Space Station, working with the Russian space program.

For this trip, paying customers will skip the space station and instead orbit two to three times higher, or roughly 500 miles to 750 miles (800 kilometers to 1,200 kilometers) above Earth.

It’s a lofty goal that would approach the record 850-mile-high (1,370 kilometers) orbit achieved by Gemini 11’s Pete Conrad and Dick Gordon in 1966.

The tourist flight “will forge a path to making spaceflight possible for all people who dream of it,” SpaceX President Gwynne Shotwell said in a statement.

Elon Musk’s California-based SpaceX already is dabbling in space tourism, signing on a Japanese billionaire to fly to the moon in three or so years. Jeff Bezos’ Blue Origin and Richard Branson’s Virgin Galactic also plan tourist trips to space, but these will be brief up-and-downs, not orbital.

SpaceX will use the same kind of Dragon capsule that will launch NASA astronauts to the space station, possibly in another few months. The capsule has flown only once in space so far, making its debut last year in a successful test flight without a crew.

Space Adventures spokeswoman Stacey Tearne said the tourist flight could occur in the last quarter of 2021. The company is in discussions with “several potential clients.”

No professional pilot or astronaut will be required, Tearne said, because the Dragon is fully autonomous. But passengers will be able to control the spacecraft if required, she said in an email.

The cost will be in line with previous tourist flights, she said. Canadian billionaire Guy Laliberte, founder of Cirque du Soleil, paid $35 million for a 1 1/2-week space station flight in 2009. He said from orbit that it was “worth every penny and more.”

Like all previous space tourists, he launched on a Russian rocket from Kazakhstan.

This private Dragon flight from Cape Canaveral will be shorter, lasting up to five days, according to Tearne.

Based in Vienna, Virginia, Space Adventures helped arrange the flight of the world’s first space tourist, Dennis Tito, founder and chairman of Wilshire Associates in California. He flew to the space station on a Russian capsule in 2001, igniting the wrath of top NASA officials who opposed visiting tourists.

The company has arranged eight space missions, with one tourist going twice.

NASA has softened its stance on space tourists, and is opening the station doors to paying customers once commercial crew flights by SpaceX and Boeing have been established.

Read Next
Computer scientist who pioneered ‘copy’ and ‘paste’ has died