NEW YORK — New York’s governor issued an urgent appeal for medical volunteers Monday amid a “staggering” number of deaths from the coronavirus, as he and health officials warned that the crisis unfolding in New York City is just a preview of what other communities across the U.S. could soon face. 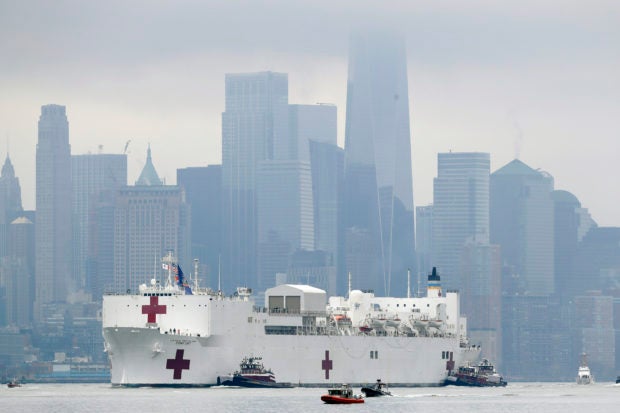 The Navy hospital ship USNS Comfort passes lower Manhattan on its way to docking in New York, Monday, March 30, 2020. The ship has 1,000 beds and 12 operating rooms that could be up and running within 24 hours of its arrival on Monday morning. It’s expected to bolster a besieged health care system by treating non-coronavirus patients while hospitals treat people with COVID-19. AP Photo/Seth Wenig)

“Please come help us in New York now,” Gov. Andrew Cuomo said as the state’s death toll climbed by more than 250 in a single day for a total of more than 1,200 victims, most of them in the city. He said an additional 1 million health care workers are needed to tackle the crisis.

Even before the governor’s appeal went out, close to 80,000 former nurses, doctors and other professionals in New York were stepping up to volunteer, and a Navy hospital ship, also sent to the city after 9/11, had arrived with 1,000 beds to relieve pressure on the city’s overwhelmed hospitals.

“Whatever it is that they need, I’m willing to do,” said Jerry Kops, a musician and former nurse whose tour with the show Blue Man Group was abruptly halted by the outbreak. He returned to his Long Island home, where he volunteered to be a nurse again.

Kops has been waiting to be reinstated since mid-March and said Monday that the state has sent him an email survey or questionnaire several times, without acting on it. In the meantime, he has been helping at an assisted living home near his residence in Shirley, N.Y., and is considering sending his resume himself to various hospitals.

In Europe, meanwhile, hard-hit Italy and Spain saw their death tolls climb by more than 800 each, but the World Health Organization’s emergency chief said cases there were “potentially stabilizing.” At the same time, he warned against letting up on tough containment measures.

“We have to now push the virus down, and that will not happen by itself,” Dr. Michael Ryan said.

Three-quarters of a million people around the world have become infected and more than 37,000 have died, according to a count by Johns Hopkins University.

The U.S. reported nearly 160,000 infections and over 2,900 deaths, with New York City the nation’s worst hot spot, but with New Orleans, Detroit and other cities also seeing alarming clusters.

Dr. Anthony Fauci, the U.S. government’s top infectious-disease expert, similarly warned that smaller cities are likely about to see cases “take off” the way they have in New York City.

“What we’ve learned from painful experience with this outbreak is that it goes along almost on a straight line, then a little acceleration, acceleration, then it goes way up,” he said on ABC’s “Good Morning America.”

In other developments around the world:

— Bells tolled in Madrid’s deserted central square and flags were lowered in a day of mourning as Spain raced to build field hospitals to treat an onslaught of patients. The death toll topped 7,300.

— In Japan, officials announced a new date for the 2020 Tokyo Olympics — summer of 2021 — as a spike in reported infections fueled suspicions that the government had been understating the extent of the country’s outbreak in recent weeks while it was still hoping to salvage the Summer Games.

— Moscow locked down its 12 million people as Russia braced for sweeping nationwide restrictions.

Italy’s death toll climbed to nearly 11,600. But in a bit of positive news, newly released numbers showed a continued slowdown in the rate of new confirmed cases and a record number of people recovered.

“We are saving lives by staying at home, by maintaining social distance, by traveling less and by closing schools,” said Dr. Luca Richeldi, a lung specialist.

At least six of Spain’s 17 regions were at their limit of intensive care unit beds, and three more were close to it, authorities said. Crews of workers were frantically building more field hospitals.

Nearly 15% of all those infected in Spain, almost 13,000 people, are health care workers, hurting hospitals’ efforts to help the tsunami of people gasping for breath.

In a sign of the mounting economic toll exacted by the virus in the United States, Macy’s said it would stop paying tens of thousands of employees thrown out of work when the chain closed its more than 500 department stores earlier this month.

The majority of its 130,000 workers will still collect health benefits, but the company said it is switching to the “absolute minimum workforce” needed to maintain basic operations.

For most people, the coronavirus causes mild or moderate symptoms, such as fever and cough. But for others, especially older adults and people with existing health problems, the virus can cause severe symptoms like pneumonia. More than 160,000 people have recovered, according to Johns Hopkins.

The crisis in China, where the outbreak began in late December, continued to ease. China on Monday reported 31 new COVID-19 cases, among them just one domestic infection, and the city at the center of the disaster, Wuhan, began reopening for business as authorities lifted more of the controls that locked down tens of millions of people for two months.

“I want to revenge-shop,” one excited customer declared.

Japanese automaker Toyota halted production at its auto plants in Europe, but all of its factories in China resumed work Monday.