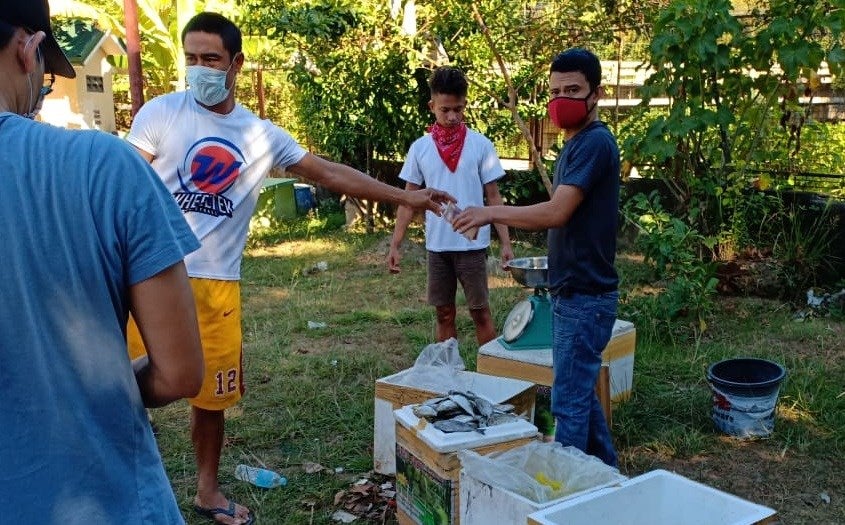 CEBU CITY, Philippines—Amid adverse impact of the enhanced community quarantine (ECQ) on the livelihood of fisherfolk, Oceana calls for their inclusion in the distribution of the Bayanihan grant and the local development fund.

The group issued this statement after they received reports that fisherfolk are unable to sell some of their catch to fish dealers since the ECQ began.

“In times of crisis, we know we can always rely on our fisherfolk to provide us with food on the table but this community quarantine has disrupted the supply chain that fishers find it difficult to adapt,” Oceana pointed out in an emailed press release.

“They need lifelines from the local government units and national government agencies such as the Bureau of Fisheries and Aquatic Resources in this difficult moment,” noted Oceana vice president Atty. Gloria Estenzo Ramos.  She added that a million ‘artisanal fisherfolk’ depend on fishing for their livelihood.

Ramos clarified that fisherfolk have the capacity to support one another but they needed significant assistance in hauling and transporting their catch from the landing area to the local market and urban areas.

Oceana disclosed that the Tañon Strait Fisherfolk Federation exerted efforts to help sell the catch of their members in the municipalities of Bantayan and Sta Fe.

Venerando Carbon, president of Taňon Strait Fisherfolk Federation, said they have to do something since their members in the two municipalities could not sell their catch. The federation bought the fish catch of their members with the help of the consolidators.

According to Carbon, they took the initiative of selling the fish harvested by their members, placed these in cold storage and brought these to Cebu City so they could sell directly to the households.

Ramos also cited the work of Celso Ilustrisimo of the Maricaban Small Fisherfolk Association from Santa Fe, Bantayan Island, Cebu who bought fish from fellow members and sold these in the satellite market in their barangay.

Oceana reported that fish dealers in different parts of the country under Enhanced Community Quarantine have either stopped operations or commanded very low prices of fish in the market, citing the closure of hotels and resorts in Bantayan and Cebu City that are major destinations of their produce.

“Fisherfolks are front liners too. Like most vulnerable sectors affected by the COVID-19 pandemic, they are entitled support from the Bayanihan Fund and the 20 percent Local Development Fund. Local government units may consider collaborating with the national agencies to mitigate the adverse effect of community quarantine to fisherfolks by helping them haul, transport and sell fish catch at the right time and at reasonable prices,” said Ramos.

Oceana welcomed the approval of the P30.824-billion “Bayanihan Grant to Cities and Municipalities,” which boost the capacity of LGUs to respond to the needs of their constituents amidst the coronavirus 2019 crisis.

Secretary Eduardo M. Año of the Department of Interior and Local Governments (DILG) explained that the one-time grant to cities and municipalities is equivalent to one month of their Internal Revenue Allotment, which they can use for their response and relief efforts.

The Bayanihan Grant will be sourced from the discontinued projects of the some government agencies under Republic Act 11465 or FY 2020 General Appropriations Act.

Meanwhile, the DILG and the Department of Budget and Management also signed a Joint Memorandum Circular No. 1 series that allows LGUs to use its 20 percent development fund to “undertake critical, urgent, and appropriate measures to curtail and eliminate the threat of COVID-19 in their areas.”

Ramos said the funds could help provide support to the artisanal fisherfolk and other vulnerable sectors.

Oceana is an international advocacy organization dedicated to protecting the world’s oceans. Since 2014, Oceana has been working closely with national and local government agencies, civil society, fisherfolk and other stakeholders to restore the abundance of Philippine fisheries and marine resources. /bmjo