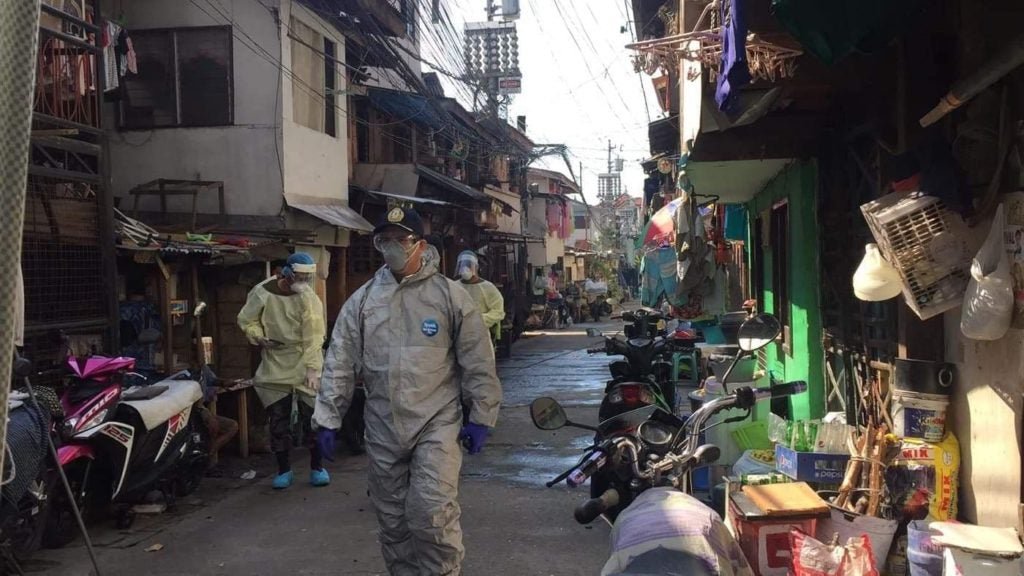 Police Colonel Josefino Ligan, chief of Cebu City Police Office (CCPO) together with Police Major Juanito Alaras of Mabolo Police station, conduct a foot patrol inside Sitio Zapatera, Barrio Luz, which was placed under a lockdown on Sunday, April 12, 2020 due to the two positive cases of coronavirus disease 2019 (COVID-19) in the area| Photo courtesy of CCPO

CEBU CITY, Philippines — When an 18-year-old mother discovered she was infected with coronavirus disease 2019 (COVID-19) on April 12, 2020, she found herself facing a blank wall.

She is a mother of twin 9-month-old infants. The three of them are among the 136 residents in Sitio Zapatera, Barangay Luz, Cebu City confirmed to have COVID-19.

It has been a week since health officers from the city told them that they had contracted the disease.

She told CDN Digital in a phone interview that since she learned about getting infected with COVID-19, she did not know what to do next but to stay at home.

“Fortunately, my children and I are still asymptomatic and doing fine. But anxiety and fear have been preoccupying my mind. I don’t know what’s the gravity of this virus, and how to deal with it,” said the mom in Cebuano.

As of Sunday, April 19, 2020, when the city recorded a total of 165 confirmed COVID-19 cases, she said she and her twin children were still waiting for authorities to transfer them to a designated quarantine facility.

This runs contrary to reports from the central office of Department of Health (DOH) on Saturday, April 18, 2020, that the infants were now placed at the Cebu City Medical Center (CCMC) and under isolation.

“But if I were given the chance, I would prefer doing home isolation because I only have my partner to rely on. If we will be transferred anywhere else, it would be hard not only for me but also for our kids,” she added.

Barangay Luz Councilor Maynard Salinguhay also confirmed that most of the COVID-19 patients in their area were still placed under home isolation.

Although disclosing that he had no knowledge of DOH central office’s updates regarding the twin infants in Sitio Zapatera, Salinguhay said they were advised that there was still work which needed to be done in the isolation facilities, including the Barrio Luz National High School.

“We were told that facilities like the school will have to be completed before we can place the patients there because once you put a patient there, construction workers will no longer be allowed to enter,” said Salinguhay in Cebuano.

Authorities in Cebu are now racing for the completion of the designated quarantine facilities in the city that will house the COVID-19 patients with mild symptoms, and those who are asymptomatic.

In a separate interview with CDN Digital, Dr. Jaime Bernadas, DOH in Central Visayas (DOH – 7) director, clarified that some patients of Sitio Zapatera had not been pulled out yet from the area because they continue to iron out mechanisms of the transfer of the patients.

“But there are already some who are admitted to the CCMC,” said Bernadas.

Bernadas also said they were expecting for the COVID-19 quarantine facility along General Maxilom Avenue to be operational on Monday, April 20, 2020.

Aside from the one located in General Maxilom Avenue, the Cebu City government is also in the process of completing another quarantine site at the North Reclamation Area (NRA).

Dr. Daisy Villa, Cebu City Health Department chief, also said the lack of appropriate quarantine facilities hampered their plans on pulling out the patients, including the mother and her twin infants.

“Most of the patients are still under home quarantine because we still don’t have the proper place to hold them,” Villa said in Cebuano.

However, she said they were looking forward to the city’s quarantine facilities to be fully operational so they could proceed with a full-scale implementation in isolating those infected from the rest of the sitio which has over 9,000 residents.

On the other hand, Villa is not recommending to lift the lockdown in Sitio Zapatera soon as they continue to monitor the situation there.

But for the mother of the twins, the uncertainty of their condition is slowly growing into a painful burden. Things have even taken a turn for the worse as they look for alternative sources of drinking water.

The mother and Salinguhay confirmed that the only water refilling station in Sitio Zapatera had suspended operations as part of its sanitation measures.

“We really need drinking water right now, and we’re hoping there will be those kind enough to donate some to us because we cannot go out and buy,” said the mother of twins in Cebuano./dbs