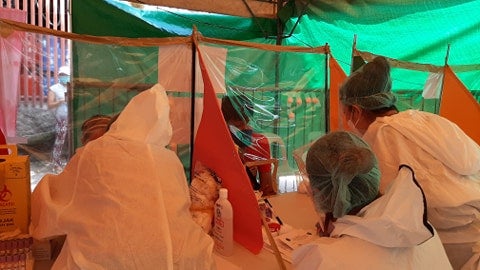 CEBU CITY, Philippines — Only 3,257 actual samples have been collected in the Lapu-Lapu City government’s rapid diagnostic test (RDT) mass testing since the tests started on May 6.

That is according to data as of May 11, 2020 from the Lapu-Lapu City Public Information Office.

With just five days left to complete the RDT mass testing in the city this coming May 15, Oscar Pineda Jr, Lapu-Lapu City public information officer, told CDN Digital that he was hopeful that in the coming days more residents would volunteer to get tested.

He also said that Lapu-Lapu City Mayor Junard “Ahong” Chan had made it clear in his previous statements that he was encouraging the people to take this chance to get tested.

(I am asking for your understanding that if we do not participate in the rapid mass testing, we will keep on extending the ECQ, and we may not be able to end this enhanced community quarantine.)

Pineda also recalled that the mayor warned the Oponganons regarding the extension of the duration of the ECQ.