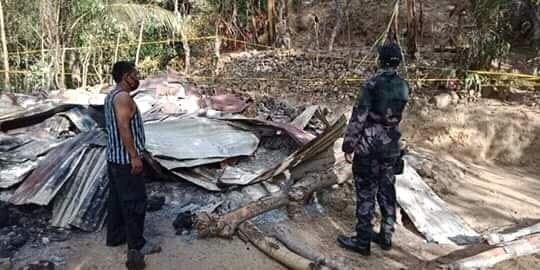 This is what’s left of the house of Patria Geralla, which burned down on Wednesday dawn, May 27, 2020. | contributed photo

CEBU CITY, Philippines— An 84-year-old woman confined to bed due to her advanced age died in a fire early Wednesday morning, May 27, 2020, in sitio Bugna, barangay To-ong here.

Labangon Police Station desk officer Police Corporal Andy Bayarcal told CDN Digital through a phone interview that an old lamp run by kerosene may have caused the fire that led to the death of Patria Geralla.

(It is possible that the reason of the fire was the gas lamp which runs on kerosene, which she was known to use since there’s no electricity in the area.)

When the responders reached the area, the house–made of light materials–was totally burned with Geralla in it.

(It was his son-in-law who noticed that the house was on fire, but when he reached the area, the fire has already burned the entire house.)

Police said Eleuterio Ewikan, the son-in-law, lives a couple of miles away from the house of Geralla. /bmjo