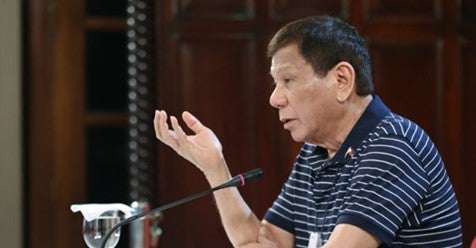 MANILA, Philippines — President Rodrigo Duterte will be working from Davao City in the next few days.

Malacañang said the President was scheduled to meet with the Inter-Agency Task Force on Emerging Infectious Diseases and address the nation from his hometown on Thursday.

“Now that he’s in Mindanao, he’s not only there for a reunion [with his family]. He will also check on Mindanao’s situation,” presidential spokesperson Harry Roque told a press briefing.

He went on: “The President will hold official functions in Davao City. This includes his report to the nation and his meeting with some IATF members in Davao City.”

Roque said some IATF members will fly to the President’s hometown for a meeting on Thursday.

Mr. Duterte is also scheduled to address the nation in a televised message that day.

The President returned to Davao City on Saturday for the second time in May as Metro Manila slowly eased its community quarantine restrictions amid the new coronavirus pandemic.

The Palace said Duterte was expected to stay longer in his hometown this time since his first visit after the two-month lockdown only lasted three days.

Prior to the COVID-19 crisis, the President usually flew home to Davao City on weekends.

Read Next
CCTO reports drop in traffic violations in May