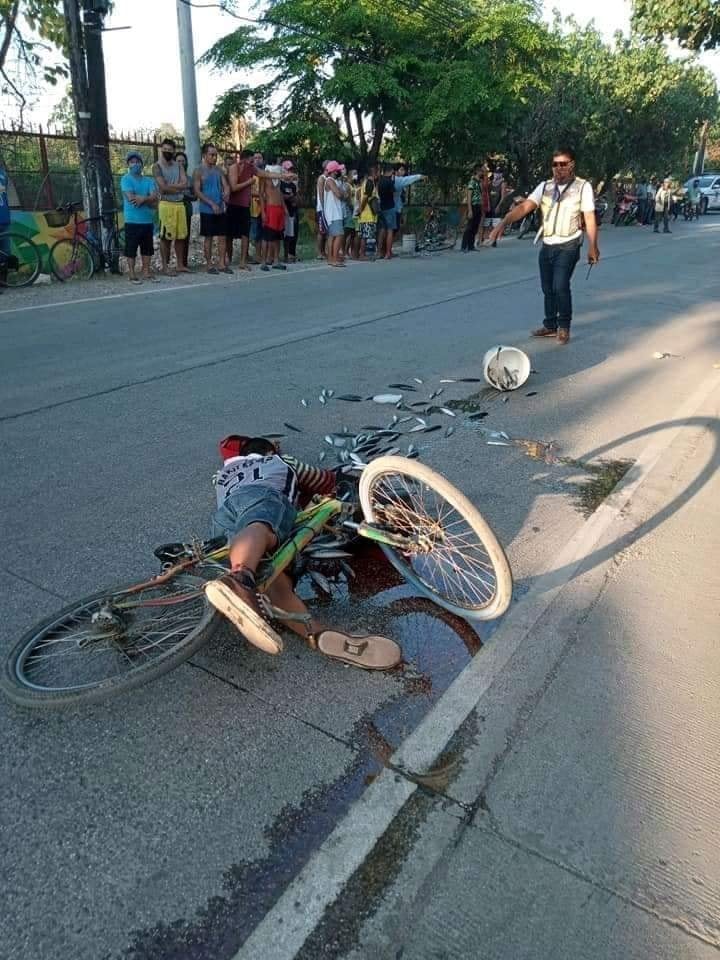 A fish vendor lies dead on the road after he was shot by still unidentified gunmen while riding his bicycle along Sitio Guisa, Barangay Agus in Lapu-Lapu City early Tuesday morning, June 3, 2020. | contributed photo

CEBU CITY, Philippines —  Station 4 of the Lapu-Lapu City Police Office (LLCPO) is asking the public for help in solving the killing of a fish vendor in Barangay Agus on Wednesday morning, June 3, 2020.

Police Captain Perceval Miasco, chief of Station 4, said he hopes anyone who may have witnessed the crime or may know something about the killing of fish vendor Edgar Daño Espinosa will come forward.

Espinosa, 43 and a resident of Barangay Marigondon, was shot dead by a still unidentified person on board a motorcycle while he was riding his bicycle to sell fish at around 6:25 a.m. along Sitio Guisi in Barangay Agus.

“For now, we really need witnesses who can help us with the case,” said Miasco.

The shooting was the third reported in as many days in Lapu-Lapu City.

On Monday, June 1, a 34-year-old job order employee of Lapu-Lapu City government was shot and killed by unidentified motorcycle-riding gunmen in Sitio Coles, Barangay Bankal at past 1 p.m.

The next day, June 2, an 18-year-old boy, Leo Padillo Duhig,  was shot while walking along the street in Sitio Casio also in Bankal around 7:30 p.m.

With these attacks, LLCPO chief Police Colonel Clarito Baja assured the public that they are not letting their guards down and will do everything to make sure peace and order is maintained in the city.

“We are looking into this and will make sure that these perpetrators will be caught,” Baja said.

Miasco said that Espinosa was riding his bicycle together with another fish vendor identified as Weber John Maragrag, 20.

Initial investigation revealed that Espinosa and Maragrag was on their way to sell fish when two men onboard a motorcycle came up behind them. One of the two suddenly shot Espinosa several times.

Espinosa was hit several times but Maragrag was able to escape. However, a bystander, identified as Tata Delima, was hit on his left leg by a stray bullet.

The assailants were quick to flee from the area after the shooting.

When the police and medical response team arrived, Espinosa no longer showed any signs of life while Delima was immediately brought to the hospital for proper treatment.

According to Miasco, they are still gathering information about the background of the victim to determine the possible motive of the killing. /bmjo