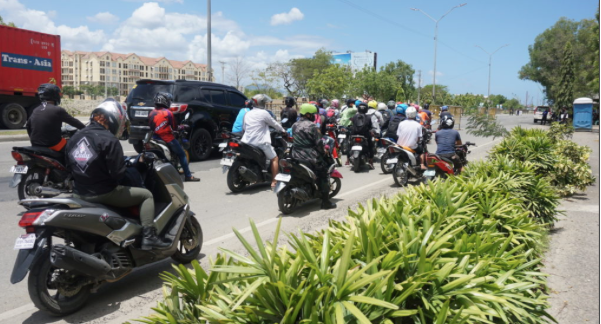 CEBU CITY, Philippines — The representative of seven districts in the Province of Cebu have expressed support to the plans of Governor Gwendolyn Garcia to allow backriding in non-commercial motorcycles.

In the manifesto, the congressmen said that there was an urgent need for the constituents for ready access to transportation under the general community quarantine, especially since jeepneys had not yet been allowed to operate.

“As our constituents crawl back from a long and difficult hiatus during the enhanced community quarantine (ECQ), mobility is absolutely essential, especially as they seek to rebuild lives put on hold and livelihood they were forced to abandon in the interest of public health,” said the Cebu congressmen.

They said that the majority of the constituents in the province had relied on family motorcycles because these were the cheapest and easiest to acquire. Family members would share rides to go to work or to run errands.

For the Cebu congressmen, the no back-riding policy of the Land Transportation Office (LTO) is a violation of Republic Act No. 4136 or the Land Transportation and Traffic Code, which does not prohibit the use of private motorcycles to transport passengers “provided that the passenger is related up to the fourth civil degree of consanguinity or affinity, and provided further, that no fee is charged.”

The congressmen said that prohibiting the law is tantamount to amending the law, which is considered ultra vires or an act done beyond one’s legal power or authority.

The lawmakers urged the transportation officials in the province and the region to support the “lawful” decision of the governor, and assist the provincial governor in the implementation of the provincial ordinance that the Provincial Board will be tackling in a session on June 5, 2020.

“We ask nothing more and nothing less: Listen to your people and follow the law,” the congressmen said.

READ MORE: Despite warning, Gwen to go on with plan to allow backriding in motorcycles

Governor Garcia has already expressed her desire to push through with the lifting of the backriding ban despite the warnings of the Department of Interior and Local Government that she may face criminal and administrative charges for doing so./dbs