No birthday party held on June 5 for Mayor Labella — Garcia

Dr.  Jaime Bernadas, Department of Health in Central Visayas director, gives updates of the COVID-19 situation in the city to the barangay chiefs at the social hall of the MCWD building today, June 5. This image was posted by City Administrator Floro Casas, Jr., which debunks the videos circulating online that a birthday party was held for Mayor Edgardo Labella at the venue.| Contributed photo

This was the statement of Cebu City Councilor Raymond Alvin Garcia amidst photos and videos circulating online claiming that a party was being held in honor of the mayor at the MCWD Social Hall while the city was still under the general community quarantine (GCQ).

Under the GCQ, public gatherings are not allowed.

Garcia also denied that there was any party that was scheduled on Friday evening for the mayor as well.

The councilor said that an event was indeed held at the MCWD Social Hall with barangay captains and other barangays workers like the Mayor’s Information Liaison Office (MILO) to get updates from the Department of Health (DOH).

“It was not a party. There were some barangay captains, not all, and other officials because there was a meeting for a DOH update. That is not true that there was a party,” said Garcia in a phone interview.

He claimed that Dr. Jaime Bernadas, the regional director of the DOH, was present to update the barangay chiefs in the meeting. 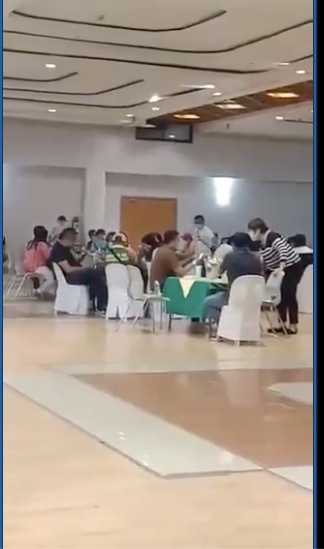 A screenshot of the alleged birthday party for Cebu City Mayor Edgardo Labella on June 5, 2020.

In the video that was also leaked online, the guests of the events were arranged in circular tables resembling a catered set-up.

There was also light music playing in the background and although the guests were wearing masks, there were no clear indicators of social distancing.

At least five chairs were placed in front of the guests indicating that there would be special guests or speakers in the event.

Garcia said that the video did not show the true purpose of the event, which was to update the barangay captains on what would happen after the GCQ.

“If naa pay party, makahibaw gyod ko kay ako man gyoy tig organize ana. (If there was a party, I would have known because I am usually the ones who organize public events),” said the councilor. /dbs

Read Next
UP Cebu: Probe ongoing to see if UP-DND Accord was violated