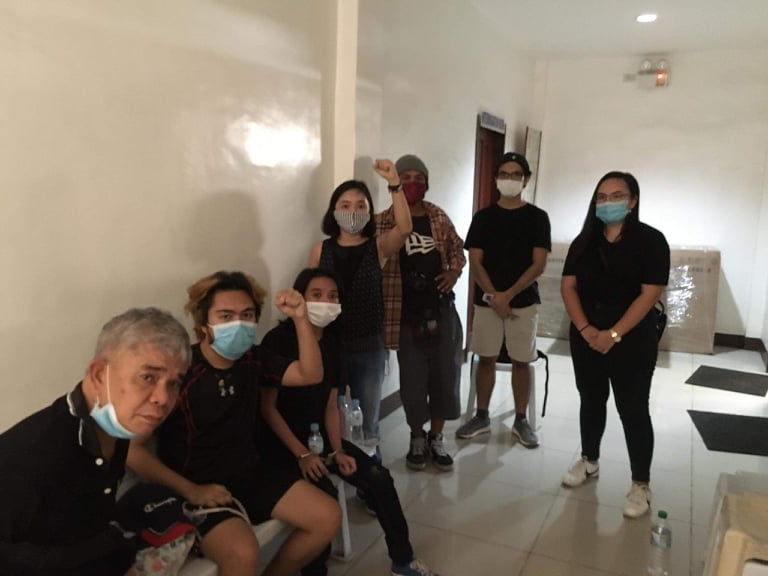 These are seven of the eight people, who are mostly members of cause-oriented groups, arrested during a rally at the UP Cebu on Friday. They are expected to be out on bail on Monday. The eighth arrested person was a bystander of the rally. | Photo courtesy of Bayan

CEBU CITY, Philippines — The donation drive to support the bail of the seven protesters and one bystander who were arrested at the University of the Philippines on Friday, June 5, 2020, were temporarily suspended due to the “overwhelming” fund that they received.

According to Lawyer King Anthony Perez, spokesperson of the detainees, the team assigned with the gathering of funds for the bail are currently auditing the received amounts from the donation channels since the start of the drive last Friday.

“For security and confidentiality reasons, it is prudent to maintain the non-disclosure of the amount raised and the respective donors,” said Perez.

Perez said that the bail amounts for the detainees were still to be determined by the prosecutor which would be included in the information to be filed in court for the initials charges on violation of section 13, BP No. 880, Sec. 9 of RA No. 11332 or the Public Assembly Act, and Art. 151 paragraph 2 of the Revised Penal Code or Disobedience of a Person in Authority.

The team assured that all the expenses will be audited and will be posted for transparency.

As of this time, the eight persons are still detained in the Waterfront Police Station.

Perez said that the men and women were in separate cells and so far no untoward incidents such as intimidation and harassment were reported.

He added that visitation were done through phone as face-to-face communication was still not allowed.

Read: Cebu8 Camp: Releasing them is our priority

The legal team for the arrested eight or now dubbed as the “Cebu8” is expected to get on Monday the resolution of the investigating prosecutor on the charges filed by police and issuance of information, which will contain the bail amount for the the detainees./dbs