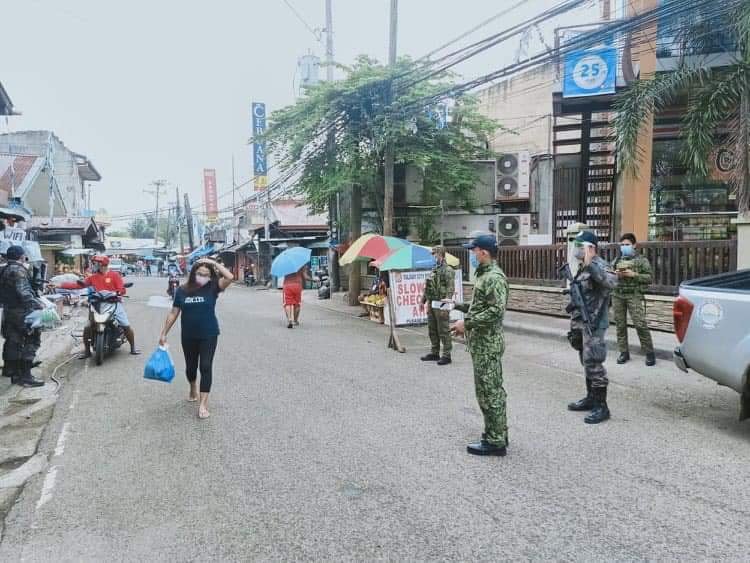 A checkpoint is put up in a village in Talisay City, Cebu on Friday morning, June 19, 2020, to make sure that the public is complying with the guidelines of the modified enhanced community quarantine (MECQ). | Photos from Police Major Gerard Ace Pelare

CEBU CITY, Philippines — The simultaneous early morning checkpoints conducted by personnel of the Talisay City Police on Friday, June 19, 2020, led to the apprehension of 14 individuals who violated the guidelines for modified enhanced community quarantine (MECQ) and traffic rules.

Of the 14 individuals, six were apprehended for failing to show their quarantine passes while eight others were flagged for violating traffic rules.

According to Police Major Gerard Ace Pelare, chief of the Talisay City Police, the checkpoints were implemented to make sure that the residents have been observing the protocols under the MECQ such as wearing of face masks, maintaining social distance, and bringing of quarantine passes.

The 14 who were arrested  were brought to the temporary detention facility of Talisay City Police at the Cansojong Gym to undergo processing.

Pelare said that despite some arrests, the public were generally compliant.

He said that there are still challenges with implementing social distancing but the personnel patrolling around are able to immediately take action and direct observance of social distancing. /bmjo

Read Next
Palace: No miracle drug vs COVID-19 yet