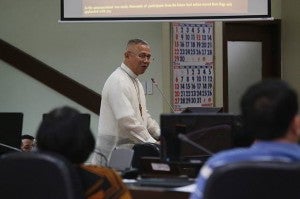 Cebu Archbishop Jose Palma briefs the Cebu City council on the preparations for the International Eucharistic Congress to be held on 2016. (CDN PHOTO/ JUNJIE MENDOZA)

The International Eucharistic Congress (IEC) committee asked the Cebu City government to provide the delegates security and transportation for the duration of the 2016 event.

The opening Mass for the IEC willl be held at the Plaza Independencia on Jan. 28, 2016.

The closing Mass will be held at the San Pedro Calungsod Shrine at SRP. The IEC committee also asked Cebu City officials to pave the roads leading to the venues of the activities.

Cebu Archbishop Jose Palma, Msgr. Dennis Villarojo, Msgr. Vincent Tupaz Jr. appeared before the city council in an executive session to brief the legislators on the status of the IEC preparations.

Villarojo said they are expecting 50,000 to 1 million to come to Cebu for the event.

Construction, conversions and the IEC

Read Next
Rama orders closure of school near river