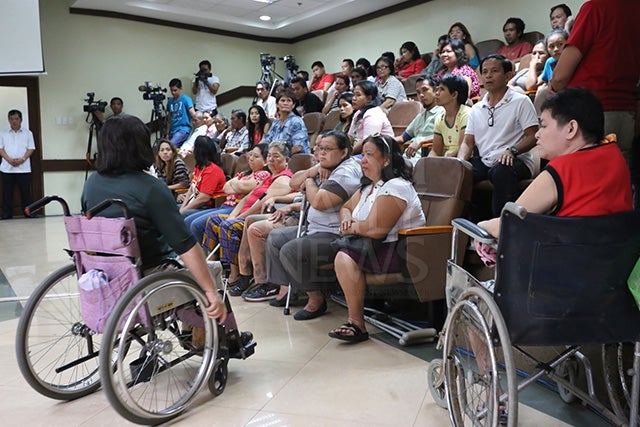 Cebu City PWD groups huddle during the Cebu City Council hearing on the proposed increase of their cash aid to P12,000 in this December 2015 photo.

CEBU CITY, Philippines — The Cebu City government will already start the distribution of the financial assistance for persons with disability (PWDs) in the city on Saturday, August 15, 2020.

In an update on his page, Cebu City Mayor Edgardo Labella said the personnel from the City Treasurer’s Office, along with barangay officials , will conduct a house-to -house distribution of the cash aid.

Each of the PWD beneficiaries will receive P3,000 covering the months of April, May, and June, Labella said.

The Cebu City Council, last July 17, passed a resolution asking Labella to already release the cash aid for the PWDs as the latter’s assistance was not included during the payout of the financial assistance for senior citizens last June.

The mayor said the city was looking at precautions so the distribution will not result in a violation of health and quarantine protocols while the city, at the time, was still under a modified enhanced community quarantine.

The city has been downgraded to a general community quarantine last August 1.

(I understand that you have waited for this cash assistance for quite a while. The city has been looking for ways that we will not be violating quarantine protocols while doing the distribution.)

While the cash assistance will be delivered to the PWDs’ homes, Labella reminded them to observe health protocols when claiming the amount, such as mask-wearing and using their own pens when signing the documents for the disbursing of their cash grant.

Labella has also urged the PWDs to install markings on their homes so the personnel conducting the house-to-house distribution will easily locate them. /bmjo

Read Next
Dry run for start of classes marred by ‘glitches’