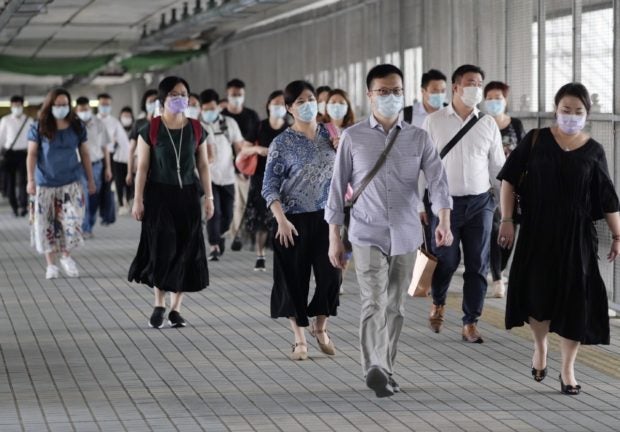 People wearing masks walk out of a metro station in Hong Kong Special Administrative Region of China on Aug 13, 2020. | Photo/Xinhua

BEIJING — A man living in Hong Kong has been infected by the novel coronavirus for the second time, according to a research by the University of Hong Kong.

The man, 33, was first confirmed to be infected on March 26, and was discharged from the hospital on April 14 after recovering from the disease.

He tested positive again during the entry screening at the Hong Kong airport on Aug 15 when he returned from a trip in Spain via the United Kingdom.

The man was hospitalized again and remained asymptomatic, said the research team of the University of Hong Kong.

The patient is believed to the world’s first documented case of reinfection by SARS-CoV-2, the virus that causes COVID-19.

Cases of presumed reinfection have been reported previously, but none have been confirmed with rigorous testing. Recovered people are known to carry viral fragments for weeks, which can lead to positive test results in the absence of live virus.

But the Hong Kong researchers sequenced the virus from both of the man’s infections, and found significant differences, suggesting that the patient had been infected a second time.

“The case illustrates that reinfection can occur even just after a few months of recovery from the first infection. Our finds suggest that SARS-CoV-2 may persist in humans, as is the case for other common cold-associated human coronaviruses, even if patients have acquired immunity via natural infection or via vaccination,” the researchers told CNN.

The findings also show that people who have had coronavirus already should nonetheless get vaccinated if and when a vaccine becomes available, the researchers was quoted as saying.

“Patients with a previous COVID-19 infection should also comply with epidemiological control measures such as universal masking and social distancing,” they said.

Experts said the finding was not unexpected, given the millions of people who have been infected worldwide.

“The second infection was completely asymptomatic – his immune response prevented the disease from getting worse,” Akiko Iwasaki, an immunologist at Yale University was quoted as saying by New York Times.

“Natural infection created immunity that prevented disease but not reinfection,” she said.