Barcelona still hoping Messi will stay with the club 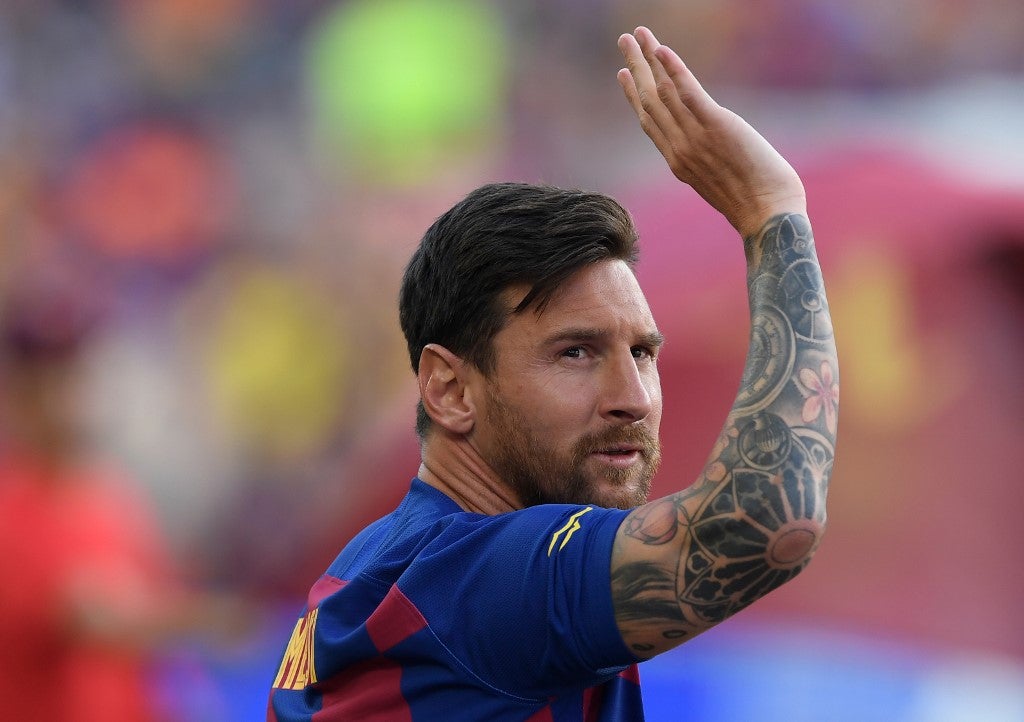 (FILES) In this file photo taken on August 4, 2019 Barcelona’s Argentinian forward Lionel Messi waves before the 54th Joan Gamper Trophy friendly football match between Barcelona and Arsenal at the Camp Nou stadium in Barcelona. – Lionel Messi has informed Barcelona he wants to “unilaterally” terminate his contract with the Spanish giants, a club source confirmed to AFP on August 25, 2020. Lawyers for the Argentina star sent Barca a fax in which they announced Messi’s desire to rescind his contract by triggering a release clause, sending shockwaves throughout the world of football. (Photo by Josep LAGO / AFP)

MADRID — Barcelona hasn’t given up on Lionel Messi just yet.

A day after the Argentine great told the club he wants to leave, Barcelona said its restructuring project still revolves around the player.

“We want to rebuild for the future together with the best player in history,” Ramon Planes, the club’s technical director, said Wednesday. “We are not contemplating any departure on a contractual level because we want him to stay. We have to show a huge respect for Messi because he is the best player in the world.”

Planes spoke as Barcelona officially introduced striker Francisco Trincão at an event that had already been scheduled before Messi announced his desire to leave on Tuesday.

“We can’t make this a dispute between Leo Messi and Barcelona because neither deserves it,” Planes said.

Barcelona is trying to avoid an abrupt ending to Messi’s career at the club. His last match with a Barcelona jersey was the embarrassing 8-2 loss to Bayern Munich in the quarterfinals of the Champions League, one of the worst defeats in the player’s career and in the club’s history.

But Messi apparently has already made up his mind, and it seems only a matter of how ugly the termination will get and if Barcelona will get any money out of it.

Dozens of fans protested in front of the Camp Nou late Tuesday calling for the resignation of team president Josep Bartomeu, and some broke into the stadium’s for a few minutes on Wednesday. They got in as the gates were opened so a truck could leave. The protesters scuffled with police for a while before clearing out. They were a minority among a few hundred who gathered outside the stadium.

Club directors who oppose Bartomeu earlier had presented a motion demanding he resigns, in the hope that it could help Messi change his mind.

“The situation has been uncomfortable for everybody,” Barcelona fan Oriol Aznar said. “This board of directors should have resigned a long time ago. Bad results, bad management. Nothing positive about them. They are destroying the club. It’s normal that Messi wants to leave. They want to end the year with a decent financial balance if they make money out of Messi leaving. But this isn’t the right way.”

Messi’s first contract with the club was signed on a napkin after a lunch between his representatives and club officials nearly 20 years ago, but it was with a burofax — a certified communication method commonly used in Spain, similar to a telegram — that Messi told the club he wants to leave.

There was no phone call or meeting with club officials. Just the burofax.

In it, Messi invoked a clause in his contract that allowed him to leave for free after the end of the season.

But Barcelona said the clause mentioned by Messi expired on June 10, meaning that the player missed the deadline and would have to pay the clause of 700 million euros ($827 million) if he wants to leave before his contract ends in June 2021.

What Messi may contend is that the clause was to expire at the end of the season, which this year was moved back because of the coronavirus pandemic.

The club said it replied to Messi’s burofax saying it wanted him to stay and finish his career with Barcelona.

“Total war!” said a front-page headline by the Sport newspaper on Wednesday.

“Goodbye by burofax,” said the sports daily AS.

Messi was outspoken against club directors throughout the season but has yet to speak publicly since the loss to Bayern.

Barcelona players are expected to report to the club on Sunday to undergo coronavirus testing, with training resuming on Monday in preparation for the Spanish league.

Former Barcelona playmaker Rivaldo said he was sad to see Messi leaving like this, and that it would be difficult for the club if it didn’t get compensated financially.

“At a complicated time like this, with the current crisis, it would be a drama for Barcelona to lose its biggest star without getting anything in return,” he said. “This is probably the biggest dispute between the parts right now, so I don’t expect a quick exit, especially after the exchange of burofaxes between them yesterday.”