MANILA, Philippines — In the wake of the deadly explosions in Jolo, Sulu last week that left at least 15 dead and 75 wounded, President Rodrigo Duterte appealed to government troops to keep fighting until terrorists are neutralized.

In his speech before troops in Jolo on Sunday, the President said the recent attack will only “strengthen” the country’s resolve “to crush the lawless elements behind this cowardly act.”

“So I will end my speech with an appeal that if we cannot really agree, then we fight and we fight hard hanggang magkaubusan na. Maybe by that time, kung ubos na ang lahat, wala ng giyera,” Duterte said in a speech aired Monday.

(So I will end my speech with an appeal that if we cannot really agree, then we fight and we fight hard to the end. Maybe by that time, if everything is gone, there will be no more war.)

The President visited the blast site in Jolo, Sulu on Sunday and delivered a speech before troops there. He also offered flowers for those who lost their lives in the explosion.

(So I am asking you that even as you fight, think about peace.)

“I cannot offer anything because I have also my mandate. I do not only order, I impose duties na gawin ninyo ito. But if in God’s time, maybe, kailan iyon? We will have time to talk and to ponder about peace at ‘yung mga anak ninyo,” he added.

(I cannot offer anything because I have also my mandate. I do not only order, I impose duties for you to do this. But if in God’s time, maybe, when is that? We will have time to talk and to ponder about peace and your children.) 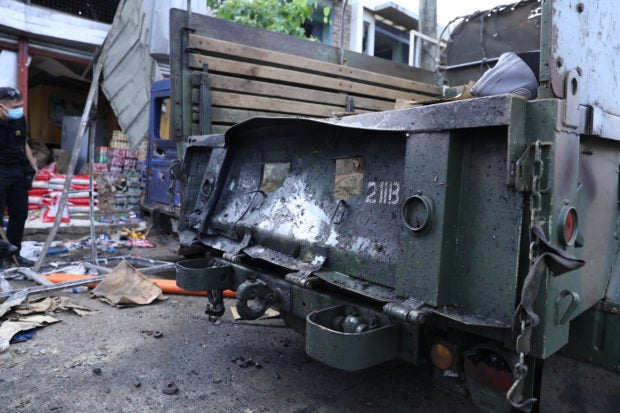 Photo shows the aftermath of the twin bombings at Barangay Walled City in Jolo, Sulu that claimed several lives including government troops and civilians and wounding dozens last August 24, 2020. President Rodrigo Roa Duterte visited the blast site and led a candle-lighting and an offering of flowers on August 30, 2020. | KARL NORMAN ALONZO/PRESIDENTIAL PHOTO

Another explosion occurred an hour later about a hundred meters away from the site of the first blast.

According to authorities, supporters of the Islamic State have claimed responsibility for the explosions.