MANILA, Philippines — The recent push by the Movie, Television Review and Classification Board (MTRCB) to regulate online video streaming sites like Netflix have drawn condemnation from cultural workers and netizens who believe that it is a way to trample free speech.

According to University of the Philippines journalism professor Danilo Arao, it seems that the country would be better off without MTRCB as it operates more as a censorship body — that actually does not regulate alleged fake information from government media sites.

“ABOLISH MTRCB: My book ‘Obhetibong Kritisismo’ (2019) includes an essay titled ‘Buwagin ang MTRCB’ (pp. 22-25).  I stressed that MTRCB is essentially a censorship body. Its proposal to regulate video streaming sites like Netflix all the more proves it,” Arao said in a tweet on Wednesday.

“MTRCB FACTOID: Believe it or not, the MTRCB is not mandated to regulate government media or any media output produced by the government. This explains why it is useless when it comes to state-sponsored ‘fake news’,” he added.

Arao even pointed to a 2010 article he wrote for alternative media site Pinoy Weekly, where he said that MTRCB’s primary mandate upon its establishment in 1985 was to temporarily act as regulator, while the country gears towards “self-regulation.”

(But as time went by, it became apparent that MTRCB was taking on a permanent trait to determine what should be shown publicly.) 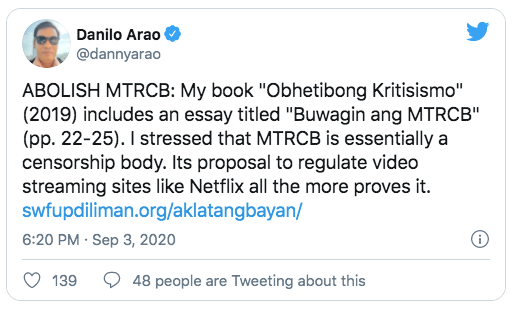 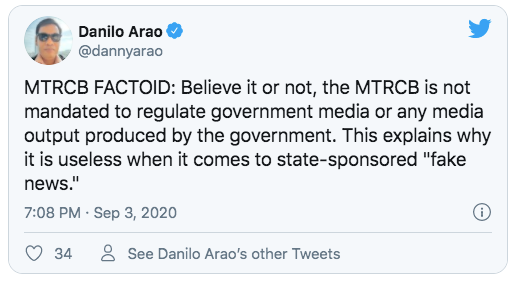 On the other hand, art and culture critic and writer Katrina Stuart-Santiago echoed the same thoughts, blaming the government for the apparent censorship on streaming shows.

“#DailyShit: September 3. This government want to regulate what we watch on Netflix. #Censorship #DutertesMen,” she said on her Facebook post. 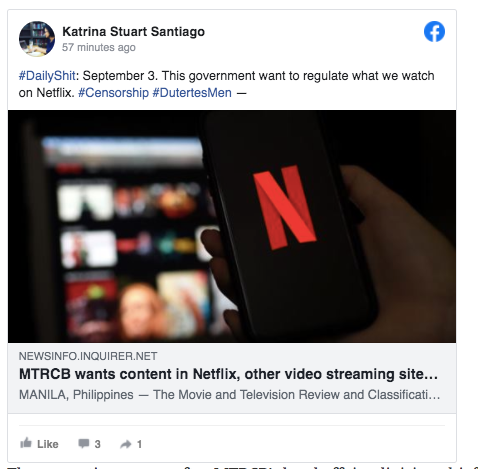 These reactions came after MTRCB’s legal affairs division chief  Atty. Jonathan Presquito told the Senate trade committee in an earlier hearing that there is a need to regulate video streaming platforms, especially as the lockdown gave people staying at home more time on these applications.

Most of the movies and shows at video streaming sites like Netflix, Iflix, are not rated, he claimed.

If video streaming sites would be registered with MTRCB, Presquito said that movies would be age-appropriate,  while prohibited content cannot be seen, and that video clips would be surely authorized by the distributors and production houses.

He also claimed that online videos are still within the mandate of MTRCB, as it is supposedly their mandate to review content regardless of where it is being shown.

These statements did not sit well with netizens and artists who claim to watch through these video streaming sites.

One netizen dismayed with the regulating board half-jokingly warned that videos on Facebook, popular dancing app TikTok, gaming streams on Twitch, and videos on Twitter and YouTube may be next.

Another one that was questioned is whether MTRCB’s influence would also reach Twitter, which has been known as a safe haven for “alter” accounts or users keen on posting nude and racy photos and videos of them.