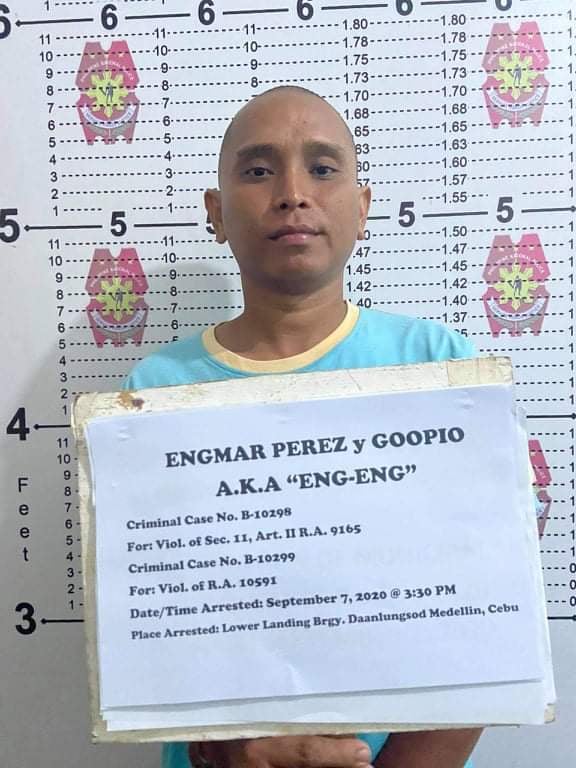 But the police finally had their chance to arrest him at about 3:30 p.m. on Monday, September 7, when he visited his home in Sitio Lower Landing, Barangay Daanlungsod in the northern town of Medellin.

Police Lieutenant Colonel Randy Korret, chief of the Provincial Intelligence Unit (PIU) of Cebu Police Provincial Office (CPPO), said that the arrest of Perez was based on a warrant that was issued by Judge Jinnefer B. Singco, the presiding judge of Branch 61 of the Regional Trial Court in Bogo City for charges for the possession of illegal drugs and an unlicensed firearm that were filed against him.

The warrant was dated February 4 but the police only managed to serve this on Monday afternoon.

Although a mere drug user Korret said they gave Perez, 32, the classification of high-value individual (HVI) because he was armed and dangerous.

Police recovered an unlicensed firearm and 3.2 grams of suspected shabu when they search his home in February.  But Perez eluded arrest then.

Perez worked as a construction worker while in hiding in the nearby San Remegio town, he added.

“The accused was a subject of a search warrant before but [he] managed to elude arrest during the implementation of [the] search warrant,” Korret said.

Following the search of his home, police went on to file complaints for the possession of an unlicensed gun and illegal drugs against him, Korret added. / dcb