By: The Korean Herald/Asia News Network via Inquirer.net September 13, 2020 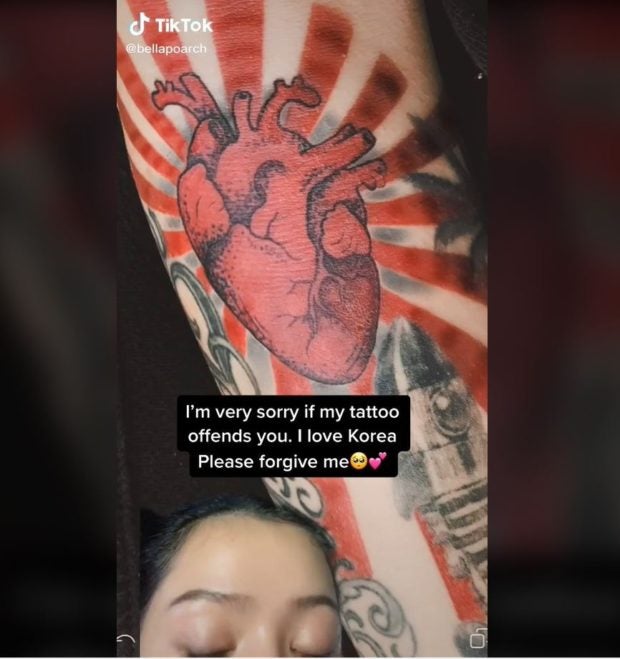 SEOUL — A brutal war of words erupted on social media from what started as a mistake by a Filipino American TikTok personality.

Over the past few days, ethnic Koreans and Filipinos have been exchanging derogatory and discriminatory insults over social media, with the Filipino side sharing posts with hashtags like #CancelKorea. An air of reconciliation was looming just as the weekend arrived.

It all comes down to a dance video posted on TikTok on Sept. 5. A Filipino American TikTok personality in Hawaii named Bella Poarch posted a video of herself dancing on the social media platform with a tattoo resembling the Rising Sun design.

The sunburst symbol with 16 rays is regarded as offensive by some, especially among Koreans and Chinese, for its association with Japanese imperialism and war crimes in the early 20th century, similar to the Nazi swastika.

Criticism immediately followed from a number of Korean accounts, denouncing her for being ignorant and offensive to viewers. Poarch a day later uploaded another video to apologize for the tattoo design.

“I’m very sorry if my tattoo offends you. I love Korea. Please forgive me,” she said in the video, adding in a comment that she “will have the tattoo removed or do cover up.”

“I did not know the history behind this tattoo and I will educate others about it,” she wrote.

But the situation was thrown into greater turmoil with overly aggressive and racist comments from a number of Korean accounts. “Poor country non-educated people short people,” one of the comments read.

The name-calling and derogatory remarks against Filipinos prompted an anti-Korean movement on Facebook and Twitter under hashtags like #CancelKorea and #CancelToxicKoreans. At that point, Koreans and Filipinos were indiscriminately throwing derogatory and racially discriminatory insults toward one another, and this continued throughout the week.

“Y’all can attack me. I’m ok with that,” said Poarch in a Twitter post, adding fuel to the war of words over social media. “But when y’all attack Philippines and make fun of them, that’s when I lose my s—.”

Some pointed out that this is not the first time that Koreans have acted offensive and racially discriminative on social media. Others shared their accounts of being racially discriminated against by Koreans, saying they don’t have the right to call out others to correct mistakes.

“Koreans need to be made properly aware of what is wrong with them,” a Twitter user wrote Friday. “Because this isn’t the first time they’ve made a racist post about a celebrity wearing the rising sun flag.”

As the feud continues, some Korean social media users are asking to end the spat of words and come to peace with respect toward each ethnicity, posting with hashtags like #SorryToFilipinos, and some Filipino users responding with #SorryToKoreans.

“Many good Filipinos have accepted the apology, but I am very sorry for those who are still hurt and hurt by racist remarks and rude remarks,” a Korean Twitter user posted Thursday.

“I sincerely reflect on the rude and racist remarks of Koreans, and I am so ashamed that I am the same Korean.”