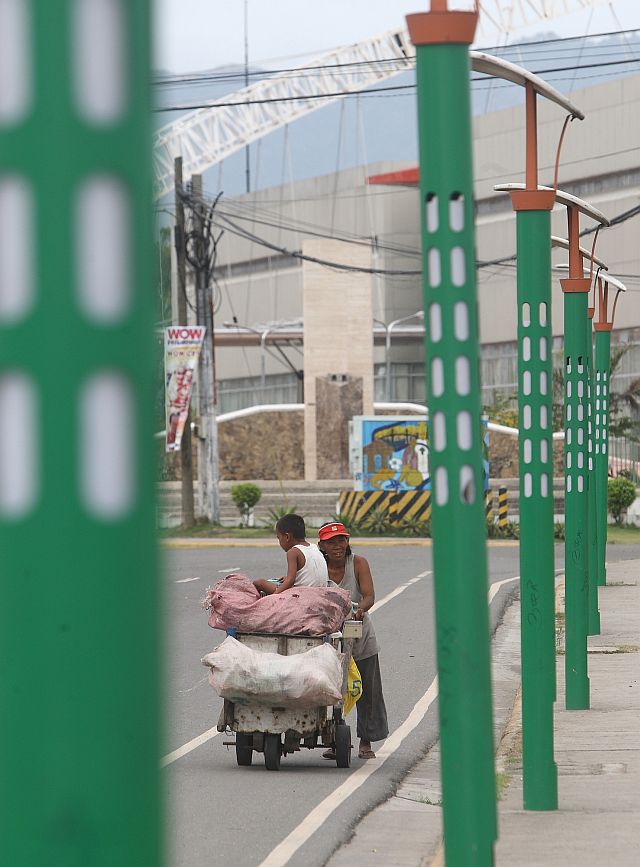 Scavengers pass through a column of the controversial lampposts installed along the sidewalk of the streets in North Reclamation Area, Mandaue City in this photo taken on Feb. 4, 2009.

CEBU CITY, Philippines – After more than 10 years since the scandal on the overpriced decorative lamp posts for the 2007 ASEAN (Association of Southeast Asian Nation) Summit erupted, several public officials and private individuals involved were found guilty for graft and corruption.

The Sandiganbayan’s 6th Division found at least three former executives of the Department of Public Works and Highways in Central Visayas (DPWH – 7) and a private citizen guilty of violating the anti-graft and corrupt practices act (Republic Act No. 3019).

As a result, the state’s anti-graft court imposed them a penalty of imprisonment with six years and one month as minimum and up to eight years as maximum. The officials found guilty were also barred from holding government office perpetually.

The decision was promulgated last September 29, 2020.

CDN Digital has opted not to reveal the names of the individuals convicted until they have responded to the issue.

The charges stemmed from the cases filed in 2007 that accused local officials, both from the local government and national government agencies, of overpricing and skipping public bidding for the purchase of decorative street lamp posts for the ASEAN Summit.

The equipment was purchased from GAMPIK Construction and Development Inc., and installed along major thoroughfares in the cities of Lapu-Lapu and Mandaue.

A total of 11 individuals were named as respondents in the complaints that were eventually elevated to the Sandiganbayan.

In their 85-page joint decision, the Sandiganbayan acquitted all 11 from the charges related to the lamp posts placed in Mandaue City for the ‘prosecution’s failure to prove their guilt beyond reasonable doubt’.

However, the former regional director, chief of maintenance division, and legal officer of DPWH – 7, and the chairman of the board of GAMPIK were found guilty of graft and corruption over the street lamp posts in Lapu-Lapu City.

The Sandiganbayan said the convicted individuals were proven to have committed a prohibited act during the performance of their official duties, gave unwarranted advantage or preference to GAMPIK, acted with manifest partiality and gross inexcusable negligence, and that conspiracy was established for the overpriced lamp posts in Lapu-Lapu City.

“(Accused) are hereby found guilty beyond reasonable doubt of violation of Section 3(e) of RA 3019, and sentenced to suffer the indeterminate penalty of imprisonment of six years and one month, as minimum, up to eight years, as maximum, with perpetual disqualification from public office,” they added.

But the judges did not order them to pay for civil damages.

“Since no payment was released by the government with respect to the subject contract, no civil liability is adjudged against the accused,” read portions of the document.

Findings from the Sandiganbayan showed that 300 sets of street lamps, priced at P83, 250 each, were assembled in selected roads in Mandaue City.

The total cost was P24.98 million but citing figures from the Ombudsman and the Commission on Audit (COA), the court said it was around P17 million in excess.

They also made the same observation for the 120 sets of lamps constructed in Lapu-Lapu City.

The project costed P35.63 million, but the Sandiganbayan said the figures were bloated after computation from the Ombudsman and COA showed an excess of around P12.6 million.

Figures from COA earlier showed that the total cost of contracts involving the street lamps was P54.94 million.

In addition, the Office of the Ombudsman in the Visayas (Ombudsman-Visayas) previously said a comparison of the costs of the lampposts, as indicated in the Programs of Work and Estimates prepared by Mandaue City and reflected in the importation documents, showed the equipment was overpriced by nearly 10 times its actual cost.

The Sandiganbayan dropped the lone case against Radaza three years ago. Ouano was named in two cases but one of these was dismissed. Ouano passed away in February 2016.

All respondents in the lamppost cases were earlier found guilty of grave misconduct by the Ombudsman-Visayas and were ordered dismissed from public service.

Ouano and Radaza, however, escaped the penalty because they were reelected. Under the Aguinaldo Doctrine, reelection condones administrative liability for misconduct done during a previous term. However, criminal liability cannot be erased. / bjmo

with reports from Philippine Daily Inquirer