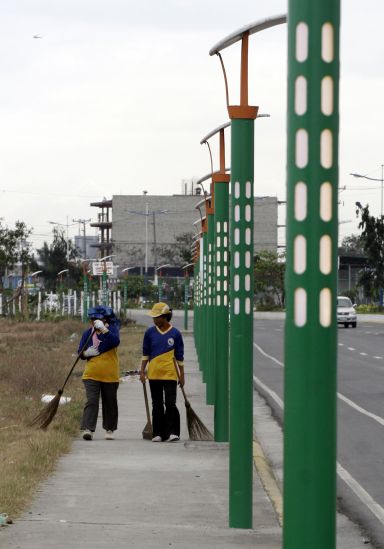 NOW GONE. Scavengers pass through a column of the controversial lampposts installed along the sidewalk of the streets in the North Reclamation Area, Mandaue City in this photo taken on Feb. 4, 2009. The lampposts have since disappeared. (CDN FILE PHOTO)

CEBU CITY, Philippines – The Commission on Audit (COA) affirmed with finality their decision to issue a notice of disallowance on the partial payment made to the contractor of streetlights in the cities of Mandaue and Cebu.

In a two-page decision promulgated on January 27, 2020, COA dismissed the motion for reconsideration filed by Gampik Construction and Development Inc.

COA reiterated that the procurement of street lights for the cities of Mandaue and Cebu in preparation for the Association of Southeast Asian Nations (Asean) Summit in January 2007 was illegal.

Gampik, in March 2017, requested to reverse COA’s decision dated December 29, 2016 affirming the disallowed amount of P43.95 million for the procurement of the controversial 1,800, China-made lamp posts.

The contractor also sought to review a previously issued audit observation, which was junked in the December 2016 ruling, that sought to reduce the amounts disallowed.

From a total of P43.95 million, the disapproved COA report showed that the total amount of disallowed contracts decreased to P25.57 million.

Previous audit observations showed that Gampik was overpaid by P24.57 million after it was found out that the actual costs of the controversial street lamps only amounted to a total of P19.37 million.

Gampik also pointed out that there’s no basis to prove that the purchase of the lamp posts was bloated or overpriced. COA, however, debunked these claims.

COA said the procurement of the lamp posts, amounting to P54.94 million, was overpriced.

“This Office has conducted canvass or request price quotation from the local supplier and another one from internet source respectively. The price quotations were the ones used in the computation of cost estimates for COA Cost Evaluation to arrive at a comparable and reasonable price there is of the subject lamp posts,” COA stated in their ruling.

COA also dismissed Gampik’s claims that negotiated procurement was valid in the purchase of the street lights.

The Commission said this mode could only be applied in times of emergencies where imminent danger is present. It added that hosting the Asean Summit was not considered an emergency.