Day 1 result of pooled testing: Only 1 out of 294 vendors is COVID-positive 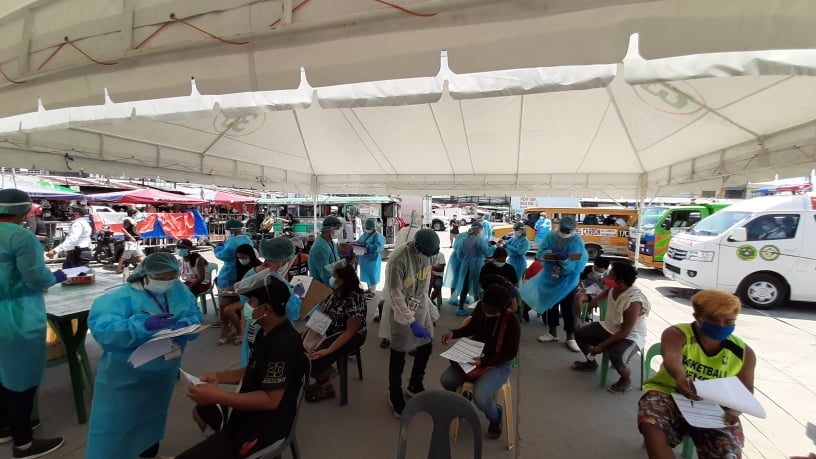 Carbon market vendors submit themselves to swab test for COVID-19 during the implementation of the city’s pooled testing. | Photo Courtesy of Cebu City EOC

On the first day of the testing of the Carbon Market vendors last Wednesday, September 30, 2020, only one out of the 294 vendors proved positive to the virus.

As the testing method is a pooled test, one batch of four samples were proven to contain the SARS-Cov2, the virus that causes COVID-19, but upon individual testing of the vendors coupled with the results of their antibody tests, it was found out that only one was actually an active case.

This means that the positivity rate for the first batch of vendors tested is only 0.3 percent.

The individuals in the batches that prove positive to the virus are then swabbed again for a confirmatory test while their antibody tests will be compared as well.

If the patient has antibodies detected, then he or she may already be recovered and will be released from quarantine, while those without certain antibodies present and lacking in others may be actively infected.

The DOH laboratories will analyze the results and the Emergency Operations Center (EOC) will conduct the necessary interventions such as isolation and contact tracing.

So far, the second batch of vendors tested on October 1, 2020, yielded low presumptive results as well. Only one batch with five samples proved positive to the virus out of the 266 vendors tested.

The five vendors belonging to the batch have been re-swabbed and the results are still pending. And even if all five samples proved positive for the virus, it will only be 1.8 percent of the total tested vendors on the same day.

Councilor Joel Garganera, deputy chief implementor, said the results of the first two days of pooled testing would show that the preventive measures in the market had been effective.

He urged the public to continue following the basic health protocols when going to Carbon. /dbs