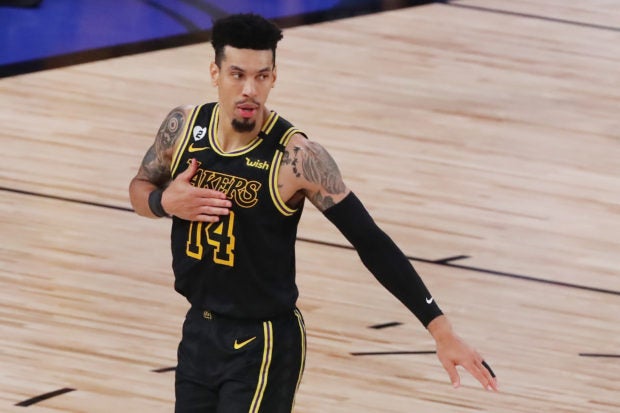 LAKE BUENA VISTA, FLORIDA – OCTOBER 09: Danny Green #14 of the Los Angeles Lakers reacts during the fourth quarter against the Miami Heat in Game Five of the 2020 NBA Finals at AdventHealth Arena at the ESPN Wide World Of Sports Complex on October 9, 2020 in Lake Buena Vista, Florida. NOTE TO USER: User expressly acknowledges and agrees that, by downloading and or using this photograph, User is consenting to the terms and conditions of the Getty Images License Agreement. Sam Greenwood/Getty Images/AFP

ORLANDO – Los Angeles guard Danny Green said he wasn’t fazed to receive death threats on social media after missing a late three-pointer in the Lakers’ game-five loss to Miami in the NBA Finals.

Green said he and fiancee Blair Bashen, a former collegiate volleyball player, had both received threats after the Lakers were unable to clinch a title on Friday.

“I had to ask, ‘Are you getting death threats?’ And she said, ‘Yeah, you are too,’ and I was like, I don’t know, because I don’t really pay attention or care,” Green told reporters after Sunday’s shootaround prior to game six in the NBA’s quarantine bubble in Orlando, Florida.

“Nor am I upset, shaken or worried about it,” Green said, adding that he’s become used to social media bullying.

“Those people’s opinions don’t matter to me,” Green said. “Only people in that locker room and on this roster are the opinions that are relevant and that matter to me. And if they’re still confident in me and still encouraged and still believe in me and believe in us, that’s all that matters to me: that we can get this thing done,” he said.

The Lakers trailed by one point when Green missed a wide-open three-pointer with 7.1 seconds remaining in the game.

Markieff Morris grabbed the rebound but accidentally threw the ball out of bounds and the Heat went on to win 111-108 and Green said his close call made him an “easy target” for frustrated Lakers fans.

“Basketball-wise, it was a good look,” Green said of the shot. “I had more time than I realized, should have took more time, probably rushed it a little bit, a little off balance.

“But we got a good look, we got a second opportunity and if I could get that play back again, I’d give anything to get that shot back again. Trust me.”

Lakers superstar LeBron James, who was under heavy pressure under the basket when he passed the ball out to Green on the perimeter, said Green’s shot not falling was just something that happens in basketball.

“Danny had a hell of a look,” James said. “It just didn’t go down. I know he wishes he could have it again. I wish I could make a better pass. You just live with it.”