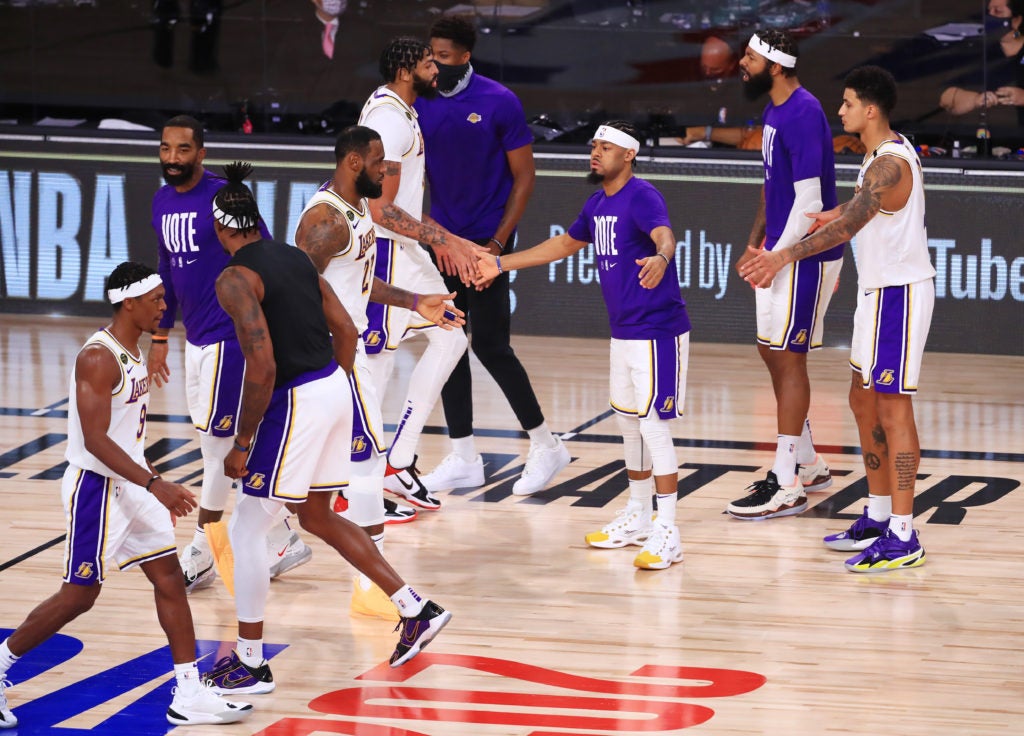 LeBron James #23 of the Los Angeles Lakers reacts with the Los Angeles Lakers bench during the second quarter against the Miami Heat in Game Six of the 2020 NBA Finals at AdventHealth Arena at the ESPN Wide World Of Sports Complex on October 11, 2020 in Lake Buena Vista, Florida. | Mike Ehrmann/Getty Images/AFP

After a decade, the Los Angeles Lakers are the NBA champions again.

The Western Conference champions Lakers secured their first title since 2010 and 17th overall after defeating the Miami Heat, 106-93, in Game 6 of the 2020 NBA Finals, wrapping up the best-of-seven series at 4-2 at the AdventHealth Arena at the ESPN Wide World Of Sports Complex on Monday, October 12, 2020, Philippine time.

The Lakers banked on a strong start, building a 64-36 at the half, and never looked back en route to scoring the title-clinching victory over the Eastern Conference champion Heat. This is the Lakers’ the first title with LeBron James at the helm.

James, who signed with the Lakers in 2018, finished with a triple-double of 28 points, 14 rebounds and 10 assists.

The Lakers were one of the 22 teams invited to the NBA Bubble to participate in the final eight games of the regular season that was temporarily suspended due to the coronavirus disease.

En route to the finals, the Lakers defeated the Portland Trail Blazers in the first round, the Houston Rockets in the semifinals, and  the Denver Nuggets in the conference finals.

The Heat were led by the 25 points of Bam Adebayo.