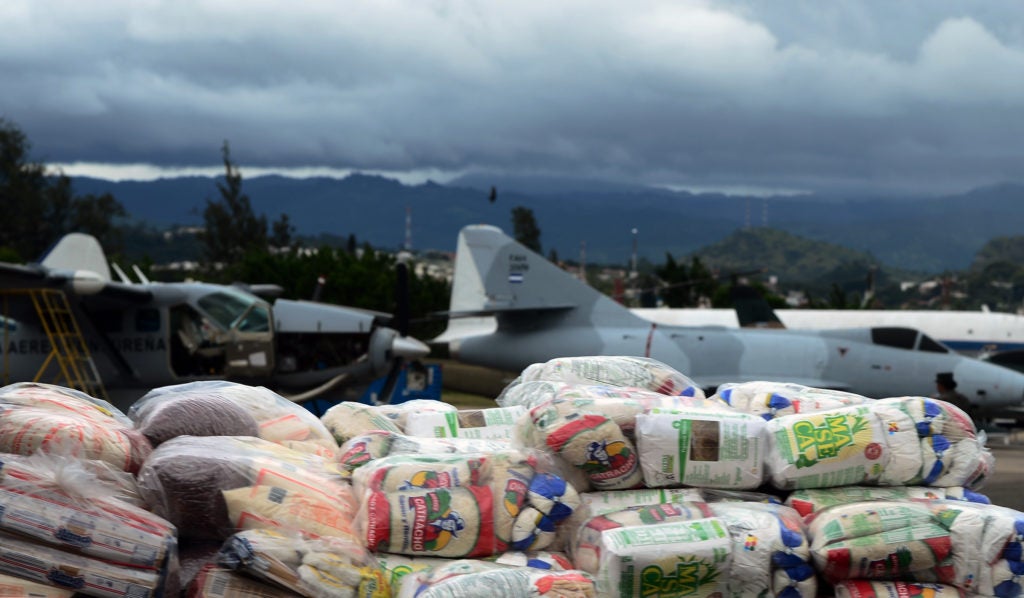 Honduran Air Force members load supplies on planes, to be taken to residents of Puerto Lempira municipality, department of Gracias a Dios, in preparation for the arrival of the upcoming Hurricane Eta, in Tegucigalpa, on November 2, 2020. | Photo by Orlando SIERRA / AFP

Managua, Nicaragua—Eta rapidly intensified to a Category 4 hurricane on Monday, November 2, 2020, as it bore down on the Caribbean coast of Nicaragua and Honduras, threatening the Central American countries with catastrophic winds and floods.

The hurricane was packing sustained winds of 130 miles (215 kilometers) an hour as it swept over the Caribbean 140 miles northeast of the Nicaraguan coastal city of Bilwi, the US National Hurricane Center said.

“Life threatening storm surge, catastrophic winds, flash flooding and landslides are expected across portions of Central America,” the NHC warned in a bulletin.

Other regions across the Caribbean and Central America are also likely to be badly hit by the hurricane, as the NHC said that “flash flooding and river flooding would be possible across Jamaica, southeast Mexico, El Salvador, southern Haiti, and the Cayman Islands.”

“We have managed to evacuate more than 3,000 families with the active participation of our army from Caribbean communities,” such as Prinzapolka and the outlying Miskito Cays, Nicaragua’s Vice President and first lady Rosario Murillo said.

Those families have been moved to shelters in high, safe areas, said Murillo.

Fortunately, their Caribbean coasts are not full of big cities, but rather small towns; Honduras has a famous resort island that includes Roatan, popular with divers.

Dangerous storm surges are expected to raise water levels by up to 18 feet (five meters) above normal tide levels in areas along the northeastern coast of Nicaragua, and up to five feet above normal along the coast of Honduras, where a tropical storm warning was in force.

“The eye of the hurricane is coming directly over Bilwi and we have it close by,” local resident Limbort Bucardo told AFP.

“There is some concern from the population, there are many flood areas, people are packing their goods and looking for ways to get out to shelters.”

Residents stocked up with food, lamps, radios and plastic bags to protect their belongings, Bucardo said.

Gonzalez said 1,600 indigenous people were evacuated from the outlying Miskitos Cays archipelago, in the path of the hurricane, on Sunday.

The government sent 88 tons of food to the region on Sunday, as well as emergency crews to help repair communications and infrastructure once the hurricane has passed.

And in mountainous Central America, flooded rivers can sweep over local residents in rural areas, in addition to triggering landslides.

Read Next
Doctor bought ‘magical’ lamp but no genie