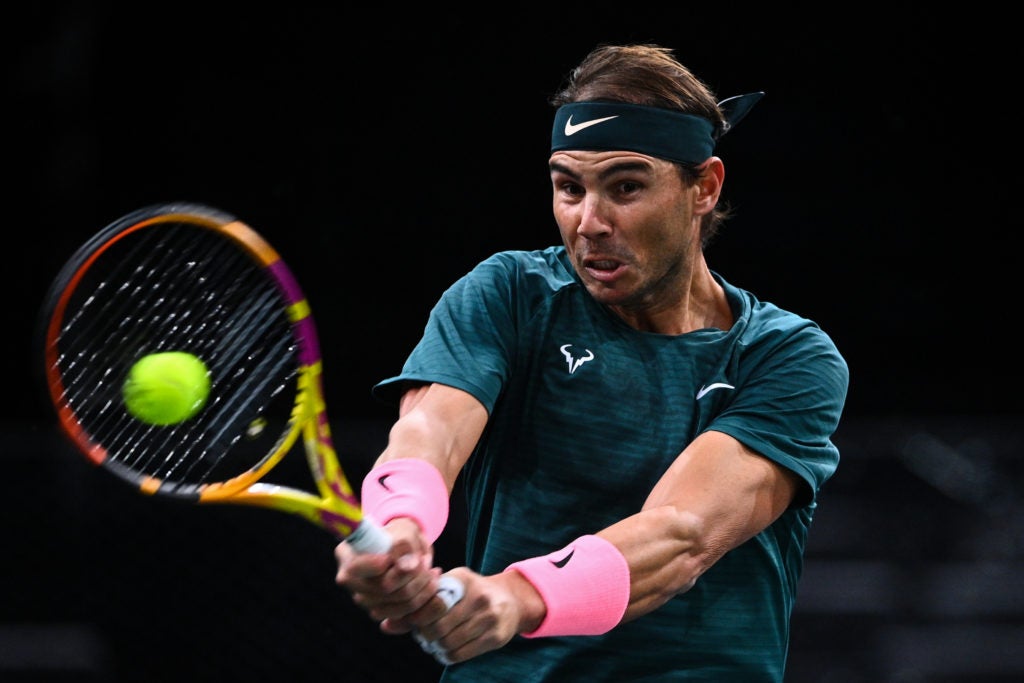 Top seed Nadal got the better of Thompson 6-1, 7-6 (7/3) to set up a last-eight clash with fellow Spaniard Pablo Carreno Busta, who must win the title this week to have a chance of snatching the last Tour Finals spot from Schwartzman.

World number 61 Thompson missed a set point to force a decider in his first meeting with the 20-time Grand Slam champion.

“He started to serve well. I missed a couple of returns I shouldn’t have,” said Nadal. “It was close. I suffered until the end but I found a way to win the tie-break.”

Nadal, who claimed his 1,000th career victory by beating Feliciano Lopez on Wednesday, is bidding for a first Paris indoors triumph which would draw him level with Novak Djokovic on a record 36 Masters titles.

The 34-year-old, who had to come from behind to edge out Lopez, raced through the opener against Thompson in just 31 minutes, breaking twice and sealing it on his fourth set point after a brief stutter from 40-0 up in the seventh game.

Thompson put up more of a fight in the second set, but missed a set point when 6-5 ahead as a Hawkeye challenge showed a Nadal backhand had landed on the baseline.

Nadal held his serve and upped his game in the tie-break to secure victory.

The world number two has still never failed to reach the quarter-finals at Bercy in his eight appearances despite only making the final once, when he lost to David Nalbandian in 2007.

Swiss veteran Stan Wawrinka made the quarter-finals with a comeback 1-6, 6-4, 6-3 win over in-form Andrey Rublev of Russia.

Rublev, who has a season-best 40 wins in 2020, had already made sure of his place at the ATP Finals.

– Schwartzman on brink of Finals debut –

Argentinian Schwartzman thrashed Alejandro Davidovich Fokina in the third round.

The sixth seed raced to a 6-1, 6-1 victory in only an hour and will face third seed Daniil Medvedev in the quarter-finals on Friday after the Russian’s 5-7, 6-2, 6-2 win over Australia’s Alex de Minaur.

Schwartzman will qualify for the Tour Finals if he wins that match or if Carreno Busta does not take the title.

“Tomorrow (Friday) is going to be a different match and it will be tough because I want to be in London,” said Schwartzman. “I need to do everything in my hands.”

The season-ending event, being played in London for the last time before moving to Turin, gets underway on November 15.

Davidovich Fokina beat former Bercy champion Karen Khachanov in the first round, but was no match for Schwartzman.

The 28-year-old broke five times and saved the four break points he faced, which all came in the opening game of the match.

Medvedev battled back from a set down to beat US Open quarter-finalist De Minaur and reach the last eight for the first time.

All seven of his ATP Titles have come on hard courts, with three of those also indoors.

“When you win such matches, especially in the way I did it, playing really good, sometimes (it) gives you extra confidence,” said the world number five. “Hopefully that’s the case.”

The winner of Schwartzman and Medvedev could face Milos Raonic in the semis, after the Canadian saw off American world number 91 Marcos Giron 7-6 (7/1), 6-1.

Read Next
Early lessons from the US elections