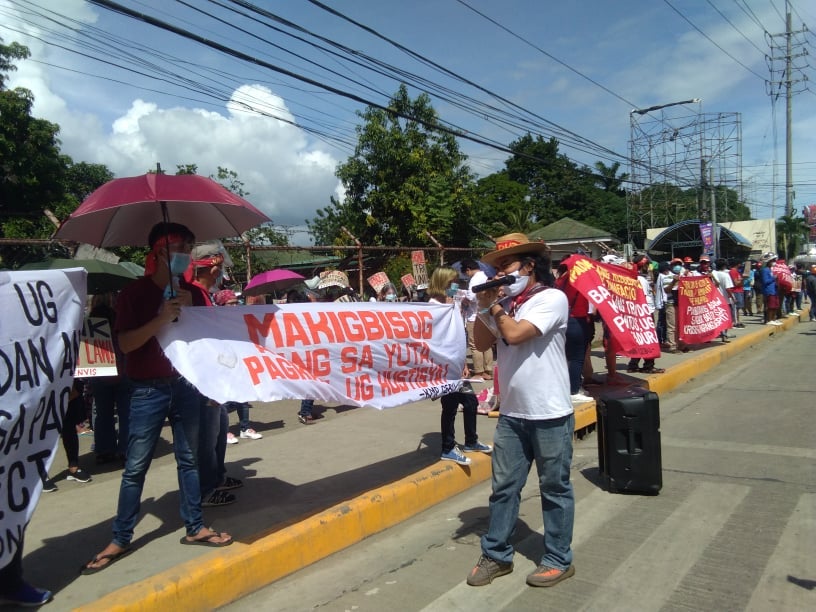 MANDAUE CITY, Philippines — There was a tense standoff for a few minutes between the police and at least 80 members of militant groups in Cebu, who held a rally in Mandaue City to mark Andres Bonifacio’s 157th birth anniversary today, November 30.

This developed after the police ordered the groups to disperse from where they were gathered in front of the Department of Agriculture in Central Visayas (DA-7) office in Mandaue City because they had violated the rule on mass gatherings.

(They were in a convoy, and we were surprised because the number of people that we monitored earlier were only 30. It so happened that when they arrived at the DA office the crowd had reached to an estimated 80 to 100 people.)

(This was quite alarming. That is the reason why the police interferred because they have violated the rules on crowd gathering and we tried hard to disperse them in a peaceful way.)

He said that the 80 to 100 protesters were given 15 minutes to finish their program and were told to disperse.

The protesters were calling for the junking of the Anti-Terror Act.

They also condemned the government for red tagging members of unions and militant groups as terrorists.

Read: ‘No place for intolerance, bigotry, red-tagging in UP,’ says chancellor

The militant groups who attended the rally included members of Bayan Muna and Anakbayan.

The situation became tense when some of the protesters argued with policemen who ordered them to disperse because they had violated the rule on mass gathering in the city.

But eventually, both sides calmed down and the protesters voluntarily dispersed.

Read: Mandaue jeepney drivers may resume operations in December yet

Meanwhile, the members of the Pinagkaisang Samahan ng mga Tsuper at Operators Nationwide (PISTON) Cebu chapter who also attended the rally appealed to the city government to allow the Traditional Public Utility Jeepneys (TPUJ) to ply back on the city streets.

(There are only a few jeepneys that have returned. Not all tradional public utility jeepneys are allowed to operate. There are so many requirements. That is why Mayor Jonas [Cortes] should do something about this. There will come a time when we will call for him to step down if he will not do any steps about this.)

The city government will be holding a one-stop-shop for the issuance of a special permit to operate for TPUJ this December 1 to 4, 2020 at the Mandaue City Cultural and Sports Complex.

The city has allowed drivers to pay their pending penalties in installments./dbs

Read Next
DepEd-7 to also probe into Madridejos crowd gathering