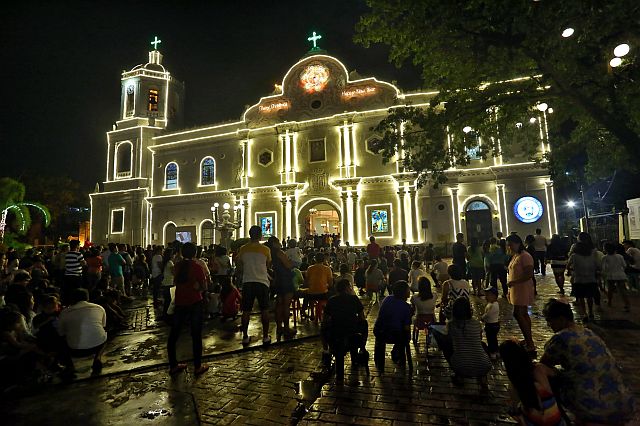 Amid the pandemic, churches may not be as full this year as compared to last year’s attendance for the Misa de Gallo like the one at the Cebu Metropolitan Cathedral on the December 16, 2019. | CDN Digital file photo

CEBU CITY, Philippines — Cebu City Councilors David Tumulak and Philip Zafra are recommending that the Misa de Gallo be coordinated properly with the barangays covered by the respective parishes.

Tumulak met with certain parishes in Cebu City to discuss the conduct of Misa de Gallo starting December 16 dawn to December 24 evening and many of the parishes have requested that parishioners be allowed to attend the Mass in the parking lots.

With this, the parishes said they would not be allowing vehicles to park in the parking lots or a portion of it so that this could be occupied by parishioners still with respect to social distancing and health protocols.

The city government has already asked the parishes to comply with a 50 percent capacity limit for both the indoor and the outdoor compound of the churches.

Certain parishes such as that in Barangay Pardo is also asking the city government that they be allowed to broadcast on speakers the Misa de Gallo in the chapels so that the public will no longer need to go to the churches.

(That is if the households will allow that the Mass be broadcaster in the chapel’s speakers. This is because there are no Masses in the chapels except for the big chapels that have covered courts.)

The Archdiocese of Cebu is also recommending two sets of Masses for dawn and two anticipated Masses the night prior to accommodate more people in batches, allowing the social distancing protocol to be implemented.

Tumulak said that the set-up would be ideal, but this had to be coordinated with the barangays so that the barangays could provide security for each Mass schedule, placing another layer of safety net for the implementation of the health protocols.

For the councilor, the church and the city government including the barangays have to work together to make the Misa de Gallo safe for the parishioners.

“We understand the importance of the Misa de Gallo for our public, and it is also a good way to instill the importance of health protocols. Whatever the priests say, the parishioners will most likely follow. We have to use that to our advantage,” said Tumulak.

The recommendations for the Misa de Gallo is awaiting the approval of Mayor Edgardo Labella, who is expected to release an Executive Order soon. /dbs