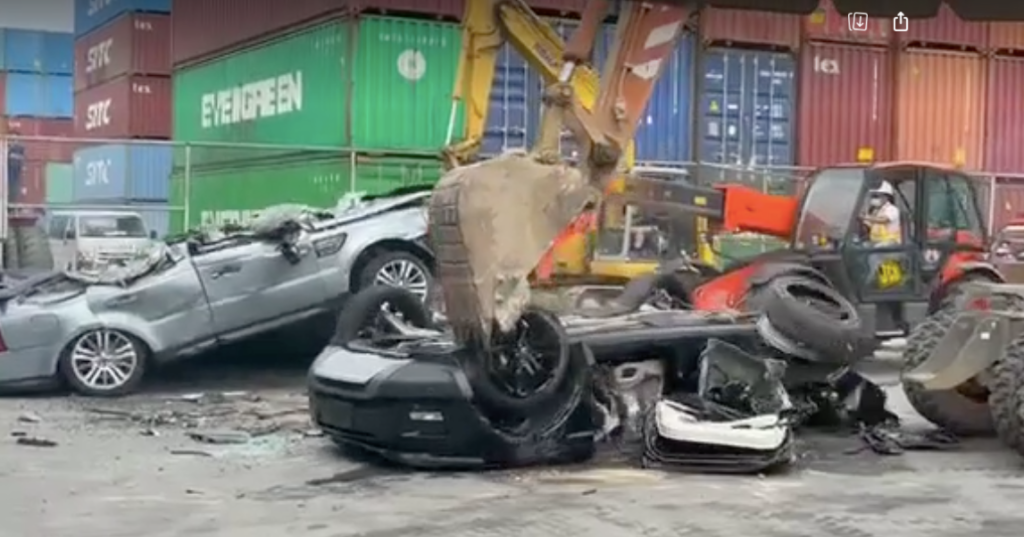 A backhoe destroys smuggled vintage and luxury vehicles in Pier 6 of the Cebu Port on February 9, 2021. | screenshot from Radyo Pilipinas – Cebu video

CEBU CITY, Philippines—Five smuggled luxury and vintage vehicles were destroyed on Tuesday, February 9, 2021, in Cebu as part of the ceremonial founding anniversary of the Bureau of Customs (BOC).

Officials from BOC-Cebu led the destruction in Pier 6. These vehicles were seized last January 2020 after they were discovered as misdeclared shipments.

A total of 13 smuggled luxury vehicles nationwide were simultaneously crushed on Tuesday as part of the 119th founding anniversary of BOC, the country’s second-largest tax collecting agency.

Acting district collector of BOC-Cebu Marc Anthony Patriarca said the smuggled vehicles they intercepted here were worth a total of P23 million.

Patriarca said four of the five vehicles were second-hand and vintage while one was a brand-new, luxury vehicle.

“They arrived from Japan through two separate shipments. All shipments were made in January 2020 that was initially declared as personal effects and car accessories,” said Patriarca.

He added that due to routinary inspection using X-ray machines, it led them to discover that the shipment contained actual vehicles.

Patriarca said BOC decided to destroy smuggled vehicles in accordance with President Rodrigo Duterte’s orders to prevent them from being recycled.

Read Next
No disconnection for lifeline customers