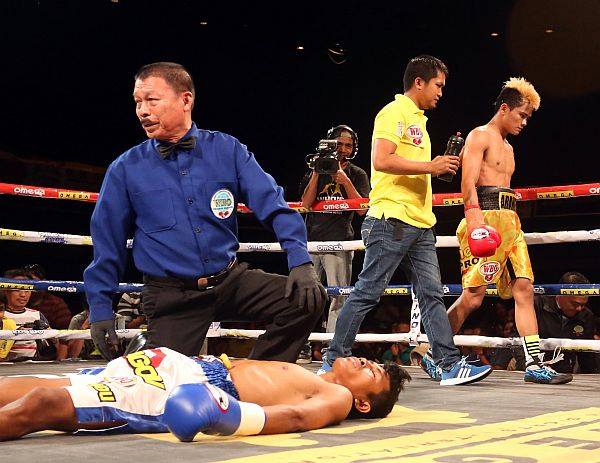 Christian Araneta is being led to his corner after knocking out his opponent in one of his fights in Cebu. | CDN file photo

CEBU CITY, Philippines — Omega Boxing Gym stalwart Christian “The Bomb” Araneta and his team are taking their past lessons seriously.

Araneta’s first international bout and first world title eliminator in 2019 for the IBF junior flyweight belt was a disaster when he lost to Mexican Daniel Valladares via fourth-round technical knockout (TKO) in Monterey, Mexico,

Araneta and his team said they have already moved on from that painful loss and reiterated that they are more than ready for another title eliminator.

This time, Araneta will be fighting the unbeaten South African Sivenathi Nontshinga (9-0-0, 9KOs) in London, South Africa on April 25, 2021.

Junco believes that they have better chances of winning this time, given their experience and the lessons they’ve learned.

“We have the experience, we have the resources, and we have the right training and sparring partners to prepare for this fight. I’ve never been this confident about my boxer. I strongly believe that we have higher chances of winning this fight,” Junco stressed.

He added that they have also recalibrated their training. Junco told CDN Digital that they are now more careful and alert, considering that Nontshinga is a well-known knockout artist in South Africa.

“We need to stay calm and alert. We have to be ready for any given situation for this fight. He (Nontshinga) may have the hometown advantage, but we will do our best to outsmart him. Our main weapon for this fight is our boxing IQ,” added Junco.

Junco also stated that their focus now is more on defense to match Nontshinga’s style. He added that the South African knockout artist is a dangerous opponent, but that they are not bothered.