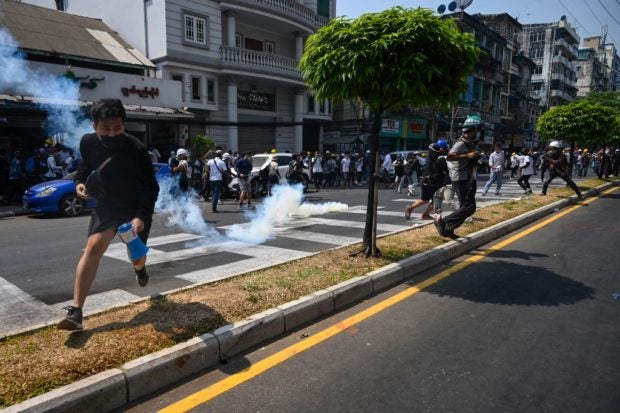 Protesters run after police fired tear gas to disperse them during a demonstration against the military coup in Yangon on February 28, 2021. Photo by Sai Aung Main / AFP

YANGON — Myanmar security forces violently dispersed anti-coup rallies around the country on Sunday, with reports of at least three protesters killed in the crackdown.

The junta has ratcheted up its use of force over the weekend against the massive street movement demanding it yield power and release ousted civilian leader Aung San Suu Kyi.

Police and soldiers had already fired rubber bullets, tear gas and water cannon on demonstrations in recent weeks in an effort to bring the civil disobedience campaign to heel, with live rounds used in some isolated cases.

Large numbers were again mobilized on Sunday morning to scatter building crowds in several parts of the country that had gathered in response to online calls for protesters to once again flood the streets.

Three men were killed and at least 20 others injured when security forces moved on a rally in the southern coastal hub of Dawei, according to a volunteer medic and local media reports.

Pyae Zaw Hein, a rescue worker, told AFP the trio had been “shot dead with live rounds”, while the injured had been hit by rubber bullets.

“There could be many more casualties as well because more wounded people keep coming in,” he added.

Local media outlet Dawei Watch confirmed that three had died in the incident.

Officers in the commercial hub Yangon began dispersing one crowd in the downtown area minutes before the slated beginning of the day’s protest, but it was unclear whether they used live rounds.

“They didn’t say a word of warning. Some got injured and some teachers are still hiding in neighbors’ houses.”

Since the military takeover on February 1, Myanmar has been roiled by giant demonstrations and a civil disobedience campaign encouraging civil servants to walk off the job.

Sunday’s crackdown followed a similar wave of violent action against angry but largely peaceful anti-coup rallies around the country a day earlier.

Several journalists documenting Saturday’s assaults by security forces were detained, including a photographer from the Associated Press in Yangon.

Near the city’s main university, police fired several stun grenades to clear a crowd at a protest hotspot.

More than 850 people have been arrested, charged or sentenced since the coup, according to the Assistance Association for Political Prisoners monitoring group.

But the weekend crackdown was expected to raise that number dramatically, with state newspapers reporting 479 arrests on Saturday alone.

International condemnation of the coup has been fierce, with the United States, the European Union and other major powers denouncing violence against protesters and demanding the junta relinquish power.

Suu Kyi has not been seen in public since she was taken into custody during pre-dawn raids in the capital Naypyidaw as the coup was launched.

She is due to face court there on Monday under obscure charges for possession of unregistered walkie-talkies and violating coronavirus restrictions on public gatherings.

But her lawyer Khin Maung Zaw told AFP he had still been unable to meet with the Nobel laureate ahead of the hearing.

“As a lawyer, I put my trust in the court and… a fair trial,” he said. “But in this period of time anything can happen.”

State media announced late on Saturday that authorities had terminated the posting of the country’s United Nations envoy, who gave an impassioned plea for help on behalf of Myanmar’s ousted civilian government.

“We need… the strongest possible action from the international community to immediately end the military,” Kyaw Moe Tun had told the General Assembly in New York.

UN spokesman Stephane Dujarric said the body had not been told of the diplomat’s firing and that Kyaw Moe Tun remained Myanmar’s representative for the time being.

At least five people have been killed since the coup — four of them from injuries sustained at anti-coup demonstrations.

The military has said one police officer has died while attempting to quell a protest.